PHILADELPHIA - Neighbors in Logan woke up Tuesday morning to what they thought was a bomb going off.  An SUV exploded and home surveillance video may have captured the person who caused the blast.

"All I heard was a loud explosion like a loud bang," said Jesse Phan of the 1200 block of Rockland Street.

His family’s security camera not only caught the SUV exploding but the moments prior to the fire.

The video shows a woman walking up to the SUV several times with what appears to be a red gas can about 10 minutes before the 8:37 a.m. explosion.

"I was inspecting the video and I seen her going in and looking around and just like dumping the gas on the car," said Phan. 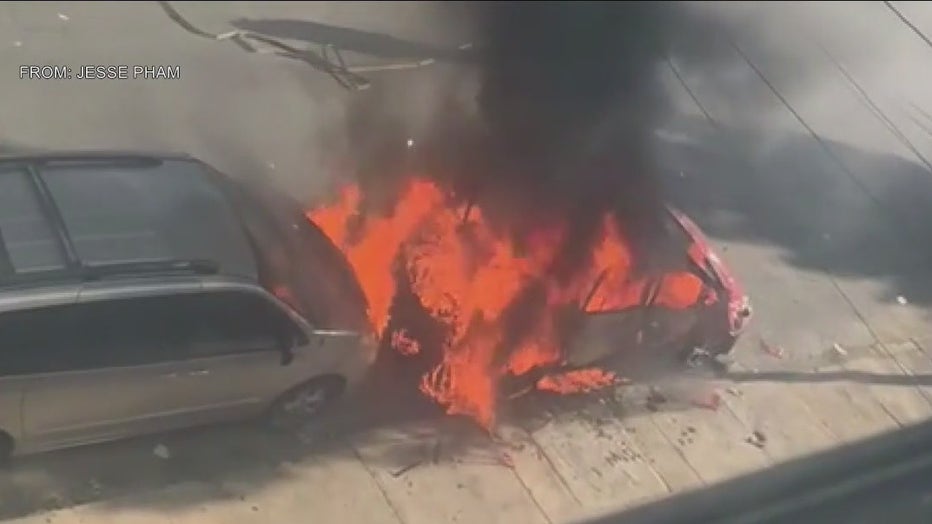 That same woman is seen running away from the burning car after it exploded. Phan’s family took smartphone video as the SUV continued to burn outside their home. It’s not clear who owns the SUV or why it was targeted.

Later in the day, Phan’s mother’s charred vehicle she uses for work now sat inoperable with a melted front end outside their home.  Phan is just grateful his 4 nieces and nephews who live inside had already left for school minutes before the explosion.

"People are just crazy. They’re psycho. They have no regards about anybody else that lives around here. And the things that go on, no one cares" said Phan.

Philadelphia police have released no information regarding an investigation.  Witnesses tell FOX 29 arson investigators were on the scene and were given the video.