The research found CBD to be active against strains of staphylococcus, which cause staph infections, and streptococcus bacteria, which cause strep throat.

SAN FRANCISCO - Cannabidiol, the non-psychoactive chemical compound extracted from cannabis and hemp plants, has been used to help treat conditions like epilepsy and anxiety, and new research suggests it could also help fight drug-resistant superbugs.

cThe research, which used a synthetically-produced form of CBD in test tubes, found CBD to be active against strains of staphylococcus, which cause staph infections, and streptococcus bacteria, which cause strep throat.

Researchers also noted that CBD had “a similar potency to established antibiotics such as vancomycin and daptomycin, and did not lose effectiveness after extended treatment.” 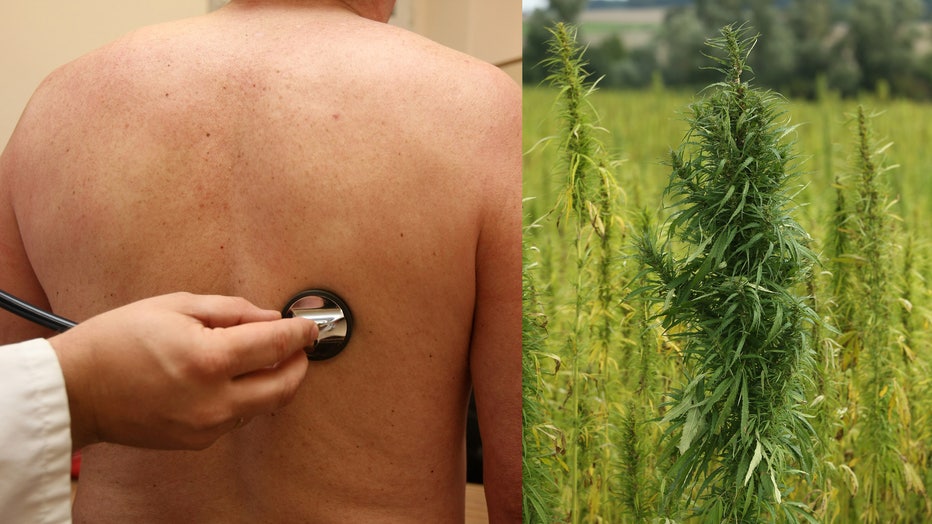 A doctor uses a stethoscope on a patient, alongside a field of legal cannabis plants. (Photos by Adam Berry and Sean Gallup/Getty Images)

Additionally, CBD was found to be active against biofilm, a physical form of bacteria growth that makes it more difficult for antibiotics to penetrate.

The findings were presented Sunday by Dr. Mark Blaskovich, a senior researcher for the Centre for Superbug Solutions at the University of Queensland in Australia, during the annual meeting of the American Society for Microbiology in San Francisco.

The research has not yet been published in a peer-reviewed journal and should be viewed as preliminary. The findings are significant, however, as high levels of antibiotic resistance have been reported worldwide, according to the World Health Organization.

A growing number of infections, including pneumonia, tuberculosis, gonorrhoea and salmonellosis, are becoming more difficult to treat as the antibiotics used to treat them become less effective, the organization says.

The research was done in collaboration and co-funded by Botanix Pharmaceuticals, a drug discovery company investigating topical uses of synthetic cannabidiol for a range of skin conditions.

Blaskovich told Live Science that people should not try to self-treat infections with CBD at this time.

"It needs a lot more work to show [that CBD] would be useful to treat infections in humans," Blaskovich told the website. "It would be very dangerous to try to treat a serious infection with cannabidiol instead of one of the tried and tested antibiotics.“

So far, the U.S. Food and Drug Administration has only approved CBD as a treatment of seizures associated with two rare and severe forms of epilepsy.

While CBD does not make a person feel high, it can provide a calming or relaxing sensation. Fans of CBD have claimed benefits including relief for pain, anxiety and depression, and one of the world's largest grocery chains announced earlier this month it would begin selling topical CBD products in stores across the country.