The 96-year-old told employees he was driving on three tires and barely made it to the entrance of the restaurant due to a flat tire and didn’t have any help to change it.

SEVERN, Md. - When a World War II veteran entered a Chick-Fil-A desperately seeking help with a flat tire, a restaurant manager jumped into action “without hesitation” and was unknowingly captured in pictures during the act of kindness.

Chick-Fil-A manager Daryl Howard was working the front line of the restaurant on Thursday in Severn, Maryland. The veteran, known to employees as 96-year-old “Mr. Lee,” entered the store “shaking” and “almost in tears,” according to fellow manager Rudy Somoza.

Standing in line, Mr. Lee told employees he was driving on three tires and barely made it to the entrance of the restaurant due to a flat tire and didn’t have any help to change it. 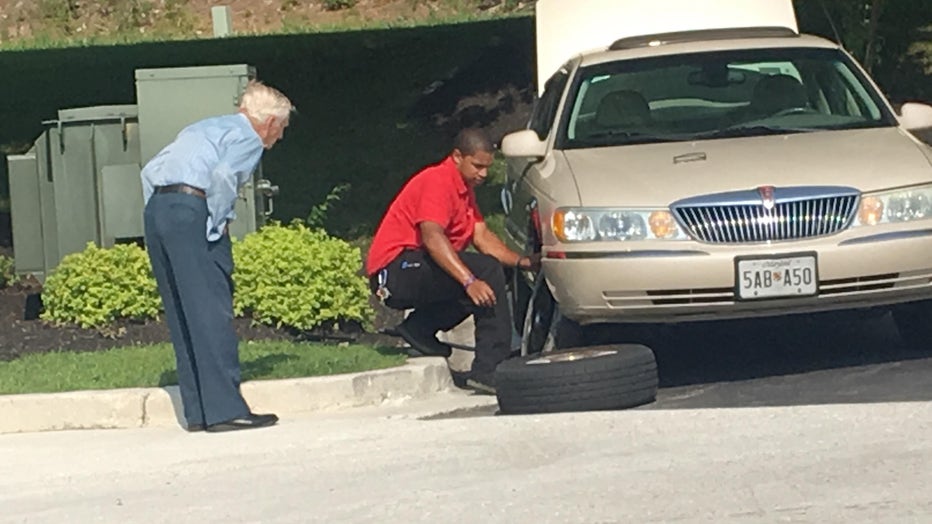 Chick-Fil-A manager Daryl Howard is seen coming to the aid of a 96-year-old man with a flat tire outside of a restaurant in Severn, Maryland. (Photo credit: Rudy Somoza)

“As soon as he finished his sentence, Daryl informed me he needed to help this gentleman right now,” Somoza said. “Daryl jumped on into action without hesitation.”

He was able to fix Mr. Lee’s tire in about 15 minutes, said Somoza — who took pictures showing the simple act of kindness. He added that Howard didn’t know he was being photographed.

“His action of kindness was beautiful,” Somoza said. “Daryl has always been so helpful to anyone in need and deserves this recognition.”

According to fellow employees, Howard has worked there for about nine years.

“I thank God I was in the right position to be witness of this touching moment,” his co-worker added.