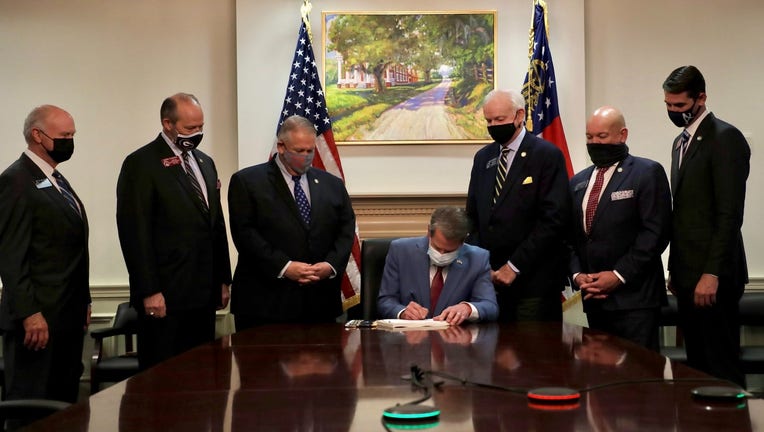 ATLANTA - Civil rights groups have filed a federal lawsuit challenging Georgia’s new Republican-backed election law, claiming that it makes it "much harder" for all of the state's residents to vote.

In a letter to more than 90,000 parishioners Monday, Bishop Reginald Jackson, who presides over more than 400 African Methodist Episcopal churches in Georgia, said the law is "racist and seeks to return us to the days of Jim Crow."

"Governor Kemp and the other racists behind this legislation think we are still living in a different time. They don’t get it.  They are out of touch," Jackson said in a statement. "They do not understand that Georgia and our country have changed. And most of all, now, they are on record as being on the wrong side of history."

Jackson called for corporate leaders at Georgia-based companies like Coca-Cola and Delta Air Lines to speak out in opposition, calling for a boycott on the companies for not speaking out more forcefully against the law.

There are calls to boycott Georgia-based businesses over the new voting law.

"It makes no sense for us to pay our dollars to buy their products and add to their corporate coffers when they refuse to stand with us and support our right to vote without measures to make it more difficult to exercise that right," he said.

The change to Georgia’s election law was made after Democrats won the presidential contest and two U.S. Senate runoffs in the once reliably red state.

The new election law was signed Thursday by Republican Gov. Brian Kemp, just hours after it cleared the state legislature. It is part of a tide of GOP-sponsored election bills introduced in states across the country after former President Donald Trump made false claims about election fraud.

The Georgia law adds a photo ID requirement for voting absentee by mail, cuts the amount of time people have to request an absentee ballot and limits where drop boxes can be placed and when they can be accessed. It also bans people from handing out food or water to voters waiting in line and allows the Republican-controlled State Election Board to remove and replace county election officials.

State Rep. Park Cannon returns to the Georgia Capitol on Monday, days after being arrested.

Republicans in Georgia argue that the law is needed to restore voters’ confidence.

"Georgia’s Election Integrity Act that I signed into law expands early voting and secures our vote-by-mail system to protect the integrity of our elections," Kemp said in a recent tweet. "The Peach State is leading the nation in making it easy to vote and hard to cheat."

"You did it, you voted for it, and now you’ve got to live with it," Lucas said. "We’re going to spend the whole next year in the courthouse."

Also Monday, a Democratic lawmaker who was arrested after protesting the law Thursday returned to the state Capitol. Atlanta state Rep. Park Cannon was arrested and charged with two felonies after she knocked on the door to Kemp’s office while he was on live television speaking about the voting bill he had just signed.

After Cannon walked with Martin Luther King III in a march around the Capitol, supporters with raised fists formed an aisle for Cannon to walk through to the House chamber. Cannon didn’t respond to questions from reporters as she walked into the chamber.

Republicans, meanwhile, said Cannon was grandstanding. Republican Sen. Randy Robertson said Cannon had ignored warnings and lawmakers needed to stand behind the police and state troopers who guard the Capitol.