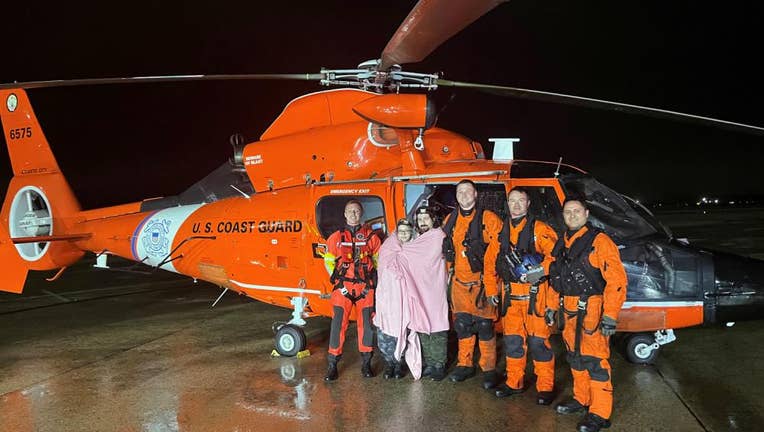 Two people were rescued by the Coast Gaurd near the Little Egg Inlet on Friday. (Photo: U.S. Coast Guard)

ATLANTIC CITY, N.J. - Two people in the Free Bird sailing vessel were rescued by the Coast Guard on Friday after their boat overturned near the Little Egg Inlet.

According to the Coast Guard, one of the individuals on the boat used a VHF-FM marine radio to call the Coast Gaurd's Sector Delaware Bay watchstanders on Friday around 8 p.m.

Authorities say the boat began heeling over while heading towards Atlantic City.

Helicopter and boat crews from the Coast Guard's stations in Atlantic City and Barnegat Light responded to the call, according to officials.

When rescue crews arrived on scene, they quickly spotted the Free Bird with both passengers on board and the aircrew began the rescue.

"With high winds, driving rain and thunderstorms in the area, our aircrew worked to quickly lower the rescue swimmer to help the couple," said rescue pilot Lt. Humberto Hernandez. "Our swimmer was able to walk in the shallow breaking surf to the Free Bird and assist the people away from the vessel to facilitate a safer hosting situation, away from the overturned vessel's mast."

Both people are in good condition, according to the Coast Guard.

The agency is reminding all mariners to have reliable communication on their vessels to help in emergency situations like this one.