FOX 29's Chris O'Connell reports on the PA national guard coming to Philadelphia to help police with riots within the city.

Fortunately, things stayed mostly calm around Philly after two weekend nights of riots. Those followed peaceful demonstrations in memory of George Floyd, the man who died last week in the custody of Minneapolis police.

There was a protest Monday outside Philadelphia Police Headquarters. A larger group met up with them to form a mostly peaceful throng marching through the city. That ended with some some late afternoon chaos on Interstate 676, when protesters blocked a portion of the Vine Street Expressway near 22nd Street.

The highway was closed in both directions for some time as hundreds blocked the way. The Ben Franklin Bridge was also once again closed as a result.

Police moved in quickly, though, using sprays and tear gas as well as firing non-lethal pellets and bean bags to clear the interstate and make what appeared to be dozens of arrests, zip-tying protesters and busing them away.

I-676 and the bridge were eventually re-opened, but SEPTA service remained suspended for the night, and the city is under a curfew until 6 a.m. for the second night in a row. There was no immediate tally of arrests or injuries.

Late in the evening, Philadelphia Police Commissioner Danielle Outlaw and Mayor Jim Kenney defended the use of tear gas during Monday's protest.

“We have repeatedly assured our great communities that we will protect, preserve, and uphold every person's constitutional right to protest. However, we can not tolerate acts of violence and other criminal activity,” Outlaw wrote in a statement, adding, "Today's deployment of tear gas was a means to safely diffuse a volatile and dangerous situation, and restore order, when it became increasingly clear that other measures were ineffective in accomplishing that necessary objective. We will continue to evaluate the propriety of all applications of force, and make determinations as the circumstances of each unique situation dictate." As is the case for all applications of force, this incident will be investigated by the Police Department's Internal Affairs Division. That investigation has already been initiated and will continue to unfold."

Kenney's statement reading in part, “The use of tear gas during a demonstration is something that I never wanted to witness during my time as mayor. I’m deeply saddened that peaceful protests for such an important cause are being diminished by actions that threaten public safety.“I want to assure the public that this was not a decision that anyone took lightly. It was made because we simply cannot condone behaviors that endanger the lives of others, like traversing an open highway. The officers on site were concerned about the safety of protestors as well as those who may be driving on the highway." 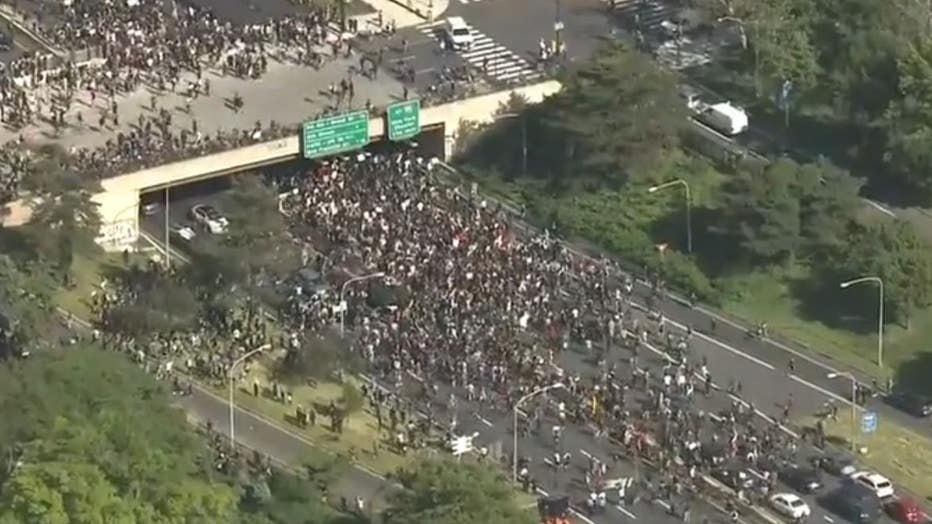 One city police officer was hurt Monday after a stolen car slammed into a cruiser, officials said. It happened around 7:15 p.m. on the 4800 block of Sansom Street. Investigators say someone stole the car from a Toyota dealership.One person was arrested, and others ran from the scene. The officer was taken to the hospital with minor injuries.

SkyFOX spent Monday night zig-zagging around the city to find troublespots. There was some tension on the streets of Fishtown, and additional arrests in Spring Garden.

We've had crews around the region, finding communities that are hopeful but bracing for what could come next.

On a call with governors Monday before the confrontation on the interstate, President Donald Trump singled out Philadelphia, where as of Monday morning destruction had been on par with that in some other major cities.

“Philadelphia is a mess. Philadelphia, what happened there is horrible. And that was on television. They’re breaking into stores and nobody showed up to even stop them,” Trump said.

Kenney responded, saying Trump has not been helpful during the protests. Kenney also said he wasn’t prepared to speculate on whether the protests and their aftermath would change the city’s plan to ease restrictions on businesses and other stay-at-home-orders by entering into the state’s “yellow phase” of coronavirus recovery Friday.

The mayor announced Tuesday's curfew won't start until 8:30 p.m. to allow for voting in Pennsylvania's Primary Election Day, which was previously postponed.

Wolf spoke with local officials and people in the community about the protests.The governor said it's important to condemn racism, oppression and violence, but that the peaceful voices were hijacked by the chaos.

Wolf also extended voting by mail for seven days in Philadelphia and five other counties. Another option is to bring your ballot to one of several drop off sites set up around the city. Those sites will be open Tuesday. There will be 10 locations across the city from 7 a.m. to 8 p.m. where voters can turn in their own ballots. We want to stress that mail-in ballots cannot be turned in at a polling location.

We'll have more coverage for you Tuesday morning from 4-10 a.m. on "Good Day Philadelphia."