Dr. Ziyad Al-Aly from the St. Louis VA Healthcare System talks about a study that found an increased risk of death in patients who developed so-called 'long COVID.'

Several studies found evidence of COVID-19 impacting the cells that create insulin in the pancreas, resulting in a higher chance for diabetes to worsen or develop in people who were infected with the novel coronavirus.

The method by which pancreatic cells are becoming infected with COVID-19 is through the ACE2 receptor, researchers posited.

The ACE2 receptor is the human host receptor for COVID-19 "which in other tissues has been shown to be a necessary component for infection permissiveness," according to a November 2020 study published in the journal "Frontiers."

The most susceptible cells are called beta cells, which are responsible for making insulin. Earlier studies found that once COVID-19 has infected the beta cells, it can replicate, making more copies of itself and spreading to other cells. 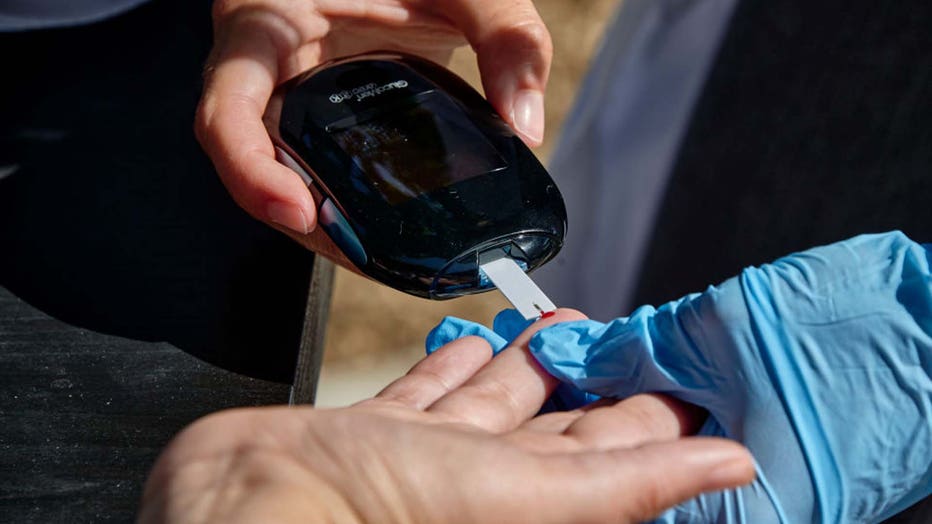 FILE - A woman receives a blood glucose test to check for possible diabetes.

Pancreatic cells that become infected by COVID-19 inhibit them from producing insulin, which is a hormone that helps the human body regulate the amount of glucose that gets absorbed into muscles, fat cells and the liver. That regulation restriction can lead to diabetes.

Diabetes occurs when an individual’s blood sugar — or glucose — is too high. Blood glucose is the body’s main source of energy and comes from food. Insulin is the important hormone made by the pancreas that helps glucose from food get into cells meant to be used for energy, according to the National Institute of Diabetes and Digestive and Kidney Diseases.

A high level of glucose in the body is the hallmark of diabetes, according to the National Institutes of Health.

Since the emergence of the novel coronavirus in late 2019, research has shown that people with severe COVID-19 infection can go on to develop other health conditions like pneumonia, blood clots and as more evidence emerges, diabetes.

Two separate studies from the Stanford University School of Medicine and Weill Cornell Medicine suggest that COVID-19 can target and damage the body’s cells that produce insulin.

Research done by the Stanford team suggested that the novel coronavirus may be more likely to infect the insulin-producing beta cells. Experts say these particular cells contain the ACE2 receptor and others that the virus uses to enter and infect human cells, perhaps making them more vulnerable.

Furthermore, it appeared to lead directly to the death of some beta cells and transform surviving ones, in a process called "transdifferentiation," according to a post about the research by Dr. Francis Collins, the NIH’s director.

"The consequences of this transdifferentiation of beta cells aren’t yet clear, but would be predicted to worsen insulin deficiency and raise blood glucose levels," Collins wrote. "More study is needed to understand how SARS-CoV-2 reaches the pancreas and what role the immune system might play in the resulting damage."

Last year, diabetes was among the top killers in the U.S. with deaths from the disease increasing by 14% — the largest rise in decades. Experts believe a big reason may be that many people did not seek treatment in an emergency because they feared becoming infected with the novel coronavirus.

Type 2 diabetes incidence has increased in recent years along with obesity rates. A 2001-17 report published online in the Journal of the American Medical Association shows the rate nearly doubled in kids aged 10-19, jumping from 34 cases per 100,000 kids to 67 per 100,000.

The Associated Press and Kelly Hayes contributed to this report.