Christopher Columbus statue boxed up as officials mull its fate

PHILADELPHIA - Crews worked to cover the Christopher Columbus statue with a protective box after Mayor Jim Kenney announced plans to initiate a public process that will consider the future of the statue.

In a letter on Monday, the mayor asked the public art director to initiate the appropriate process through the Philadelphia Art Commission.

No decision has been made on whether the city will remove the statue.

Mayor Kenney released a statement, which reads in part, “I believe that a public process will allow for all viewpoints—especially those of indigenous people whose ancestors suffered under the rule of European colonizers—to be considered. It’s also my hope that by initiating this process, the current tensions in Marconi Plaza can end. I urge all South Philadelphians attempting to protect the statue to stand down and have your voices heard through the public process."

Emotions boiled over for the third night in front of the Christopher Columbus statue on Monday. Police spent the day separating small groups of demonstrators who came to South Philly calling for the removal of the controversial statue. At one point, an arrest was made when a man knocked a phone out of the hand of a protester taking video. 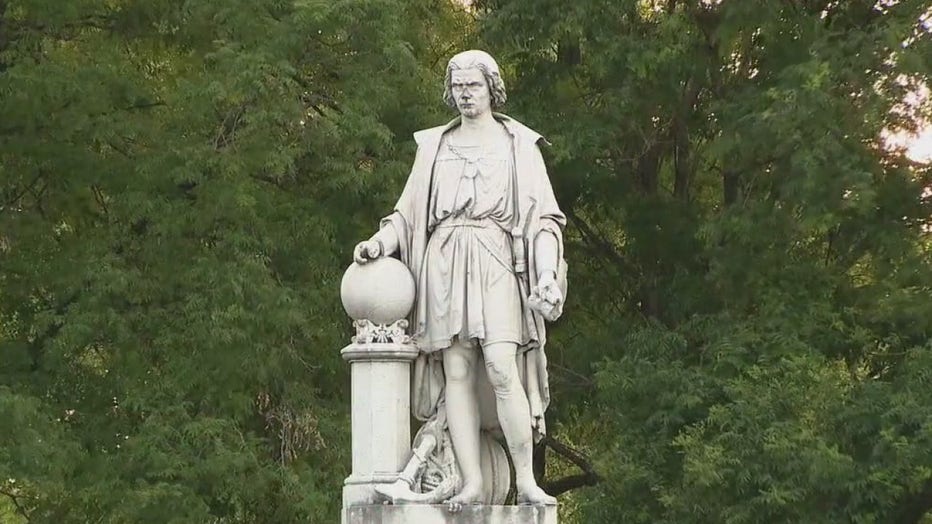 The statue was originally erected in Fairmount Park in 1876. It was moved to Marconi Plaza and refurbished in 1982. Columbus’ documented history as a racist and ruthless slave trader has made his statues a recent target for vandals.

No decision has been made on whether the city will remove the statue. A timeline for the public process is still pending.

Read the full letter below or mobile users click here.

The Delaware River Waterfront Corporation said Tuesday that the base of the Columbus monument will be covered.

"We are committed to listening and moving in a direction that will begin the healing process through robust public engagement. This engagement process will involve many stakeholders, one of which is the City of Philadelphia. This process may lead to a range of options for the monument, including its removal," the Delaware River Waterfront Corporation said in a statement Tuesday.