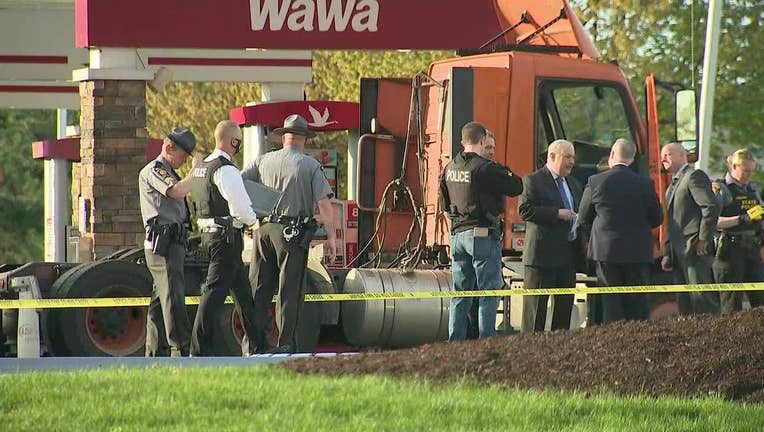 UPPER MACUNGIE TOWNSHIP, Pa. - Authorities still don’t know why a man opened fire at a convenience store in Pennsylvania last week, killing a truck driver who was pumping gas and wounding another man before taking his own life.

The Lehigh County district attorney’s office on Wednesday released more details about the shooting spree but said the suspect’s electronic devices, including his cellphone, revealed no information about the crime or a motive.

Za Uk Lian first shot at a car on a highway several miles away before heading to the Wawa convenience store in Upper Macungue Township, outside Allentown, around 4:45 a.m. on April 21, authorities said. Lian had approached the woman’s car from behind, pulled into the right-hand lane next to her and fired a shot that hit the passenger-side door before speeding way, authorities said.

At the Wawa, Lian pulled up next to a parked Jeep and shot and critically wounded the driver, then shot and killed 31-year-old Ramon Ramirez as Ramirez was pumping gas into his truck, authorities said.

Lian did not interact with either victim before shooting, the DA’s office said.

Lian then pointed his semi-automatic pistol at a group of people, and confronted two other drivers in the Wawa parking lot and demanded their vehicles, before fleeing on foot as police arrived. He shot and killed himself about a quarter-mile away, the DA's office said.

Lian, a naturalized U.S. citizen from Myanmar who settled in the U.S. in 2013, had lived in Washington state before moving to the Allentown area two years ago. He worked at a Home Depot warehouse near the Wawa.

Lian legally purchased the gun he used in the shooting on Jan. 31 and received a concealed carry permit in March, according to authorities.

A longtime friend, Abraham Pa Cawi, said the shooting took him by surprise. He told lehighvalleylive.com that Lian was stressed because he fell ill and had to call off work despite struggling with a language barrier. Cawi called him a "good guy, good-natured," who gave no warning that he was any threat.

The DA's office said Lian last worked at the warehouse on April 9 and is believed to have tested positive for COVID-19 on April 12.