Biden announces month of action to encourage Americans to get vaccinated

President Joe Biden announced a month of action to urge more Americans to get vaccinated before the July 4 holiday in remarks on June 2, 2021.

According to data collected by the U.S. Centers for Disease Control and Prevention, 9,117 people tested positive on May 31 and another 8,911 tested positive the following day.

"This is the type of news I would like to deliver," CDC Director Dr. Rochelle Walensky said at Thursday’s White House COVID-19 response team briefing. "And certainly, these data are encouraging and uplifting as we battle this pandemic."

The new lows were not sustained for long, with daily cases jumping to 14,354 on June 2. But it is a far cry from the massive daily case tallies last winter.

RELATED: ‘America is coming back’: Biden makes case for economic investment during speech in Cleveland

The first of three FDA-authorized COVID-19 vaccines became available during the winter surge. Since shots began going in arms, cases have plummeted. But more importantly, the hospitalization and death rates have fallen, alleviating the pandemic’s pressure on the health care system.

America’s pandemic recovery has allowed some pre-pandemic norms to return. The CDC has cleared fully vaccinated people for domestic travel, and they have issued guidance saying vaccinated people can safely go without masks in most settings.

Many retailers have embraced the new guidelines, rolling back their mask policies. Sporting events that were empty last year have welcomed back fans in recent weeks. 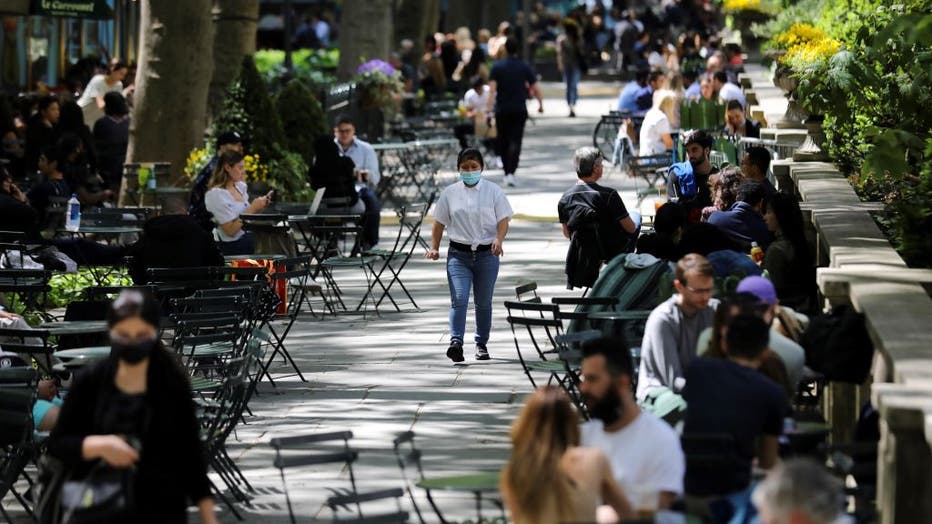 A woman walks through Bryant Park in New York, the United States, on May 14, 2021. (Photo by Wang Ying/Xinhua via Getty Images)

"One of the things we get concerned about at the public health sector is that we’re seeing the numbers come down, as you just showed on your chart," Fauci said. "That’s really good news. But we don’t want people to look at those numbers and say ‘We’re out of the woods.’"

According to the CDC, more than 50% of the population has received at least one dose of a COVID-19 vaccine. Roughly 41% have been fully vaccinated.

Experts have estimated herd immunity lies somewhere north of 70% of the population being fully vaccinated. But they have expressed doubts about achieving that percentage since America’s vaccination effort has slowed to a crawl.

In April, the U.S. was administering more than 3 million doses per day. Over the last month, that has dropped significantly.

States and businesses are working to incentivize unvaccinated people to get the jab. Some states have offered entries into a special lottery while businesses have offered discounts and freebies to customers who take the shot.