The legacy of Dale Earnhardt Sr.

Shockwaves rippled through the world of racing after the 49-year-old driver had to be cut from his battered car and transported to the Halifax Medical Center where he was pronounced dead from head injuries.

FOX 35 Good Day Orlando co-anchor Ryan Elijah, who was at the race when Earnhardt died, said, "Everyone was shocked. The wreck was bad, but no one thought it was bad enough to take his life."

"This was well before social media, so it took a few hours for the news of his death to travel," Elijah said.

Amidst the chaos, the crash did not look serious at first glance, but 90 minutes after the race ended, NASCAR President Mike Helton made the announcement that Earnhardt had died.

Earnhardt, a master of superspeedway racing, was fighting for third place, leading a tightly bunched five-car pack heading through the final turn of the race.

The back left corner of his famed black No. 3 Chevrolet was bumped by Sterling Marlin. Earnhardt’s car fishtailed slightly and briefly slid to its left, down toward the infield, before suddenly swinging back to the right and cutting across traffic at a sharp angle.

He clipped Ken Schrader, whose yellow Pontiac carried both cars hard into the concrete wall headfirst at about 180 mph.

Reaction to the crash and Dale Earnhardt’s death

The scene was grim as safety workers removed Earnhardt from the car. Fans in and around the sprawling speedway wept after hearing the news. The track lowered its huge American flag in the infield to half-staff after the race.

The accident happened a half-mile from the finish line of the race.

It was supposed to be a historic moment for Earnhardt Inc., the company and NASCAR team founded by Earnhardt, who was fighting for third place behind his teammates Michael Waltrip and son Dale Earnhardt Jr.

Most of the fans’ attention at the time of the crash was on the fight for the checkered flag between Waltrip and Earnhardt Jr.

But Earnhardt’s death completely overshadowed the victory by Waltrip.

Waltrip screamed "This is the Daytona 500, and I won it! I won the Daytona 500! I can’t believe it!" But he was somber as it became apparent that his new boss was badly injured.

"The only reason I won this race is Dale Earnhardt," Waltrip later said.

Waltrip took the lead 16 laps from the end of the 200-lap race at Daytona International Speedway and stayed in front, with Earnhardt Jr. and the elder Earnhardt protecting his flank.

The fatal injuries Earnhardt sustained were triggered by both the collision that pushed his car off the track and the concrete wall the racing champion crashed into.

At the time of Earnhardt’s death, NASCAR didn’t require drivers to wear devices that prevented their heads from whipping during accidents.

When Earnhardt crashed, his car flew at 180 mph into a concrete track wall.

According to an independent medical report from Dr. Barry Myers, Earnhardt’s lap belt had broken and his death was caused by his chin hitting the car’s steering wheel. 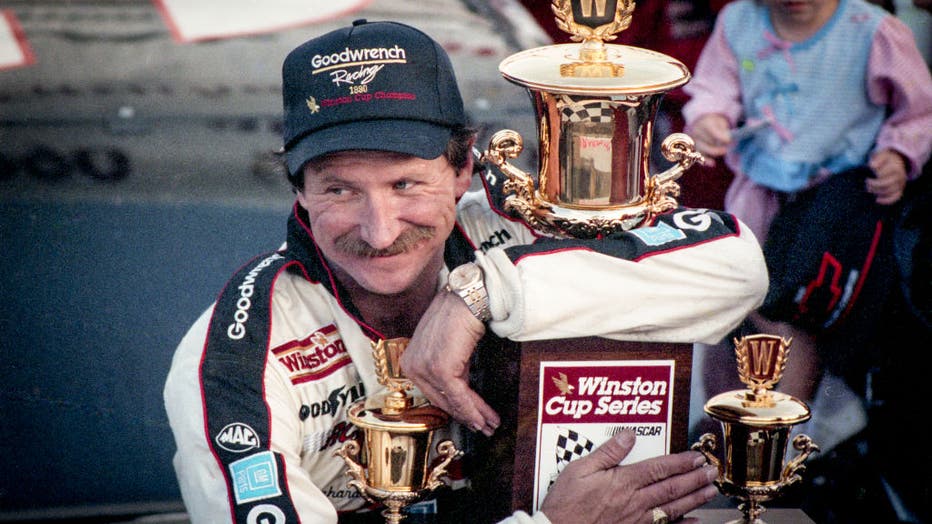 This resulted in several broken ribs and a skull fracture that caused bruising and bleeding to the soft tissues of Earnhardt’s brain.

Before NASCAR implemented energy-absorbing walls, many drivers seemed to view crashes as tragic but inevitable. Most had an out of sight, out of mind attitude about the perils of racing.

"Up until that point, when somebody had an accident and it took their life... you just thought, That could happen to anybody, but it’s not going to happen to me,'" Earnhardt Jr. said in an interview with FOX Sports.

Earnhardt Jr. retired from full-time racing in 2017. "You just went to the next race and ran the next lap," he said.

The death of Earnhardt left NASCAR reeling in the wake of a 2000 season in which three of its young stars were killed in separate accidents.

Adam Petty, the fourth generation of stock car racing’s most famous family, and Kenny Irwin died in crashes two months apart at New Hampshire International Speedway. Tony Roper was killed later in the year in a crash during a truck race at Texas Motor Speedway. All three died of the same type of head injuries that apparently killed Earnhardt.

Following those deaths, safety had become a front-burner issue for the sport, with a debate over possible rules changes and the use of new safety equipment. Earnhardt wore an open-faced helmet and shunned some of NASCAR’s other basic safety innovations.

He didn’t like the restrictor plates NASCAR used to slow speeds at its fastest tracks, and refused to wear a Head And Neck Safety (HANS) brace that recently has been touted as a way to help prevent serious head injuries.

In the 11 years preceding Earnhardt’s death, nine drivers died during NASCAR national series races. In the two decades since, the sport remarkably has not suffered a single driver fatality at a major NASCAR race. Zero deaths in 20 years, despite horrific accidents such as Ryan Newman’s crash in the 2020 Daytona 500.

In response to Earnhardt’s death, NASCAR spearheaded a driver safety overhaul that experts estimate has saved dozens of lives over the past two decades, based on the sport’s pre-2001 fatality rates.

Some notable achievements for safety by NASCAR since Earnhardt’s death include:

— SAFER Barriers: The Steel And Foam Energy Reduction Barrier was designed to absorb and reduce kinetic energy during high-speed crashes. "Soft walls" have been gradually added to nearly every NASCAR track, first in high-impact areas and later, after Kyle Busch broke both legs in a 2015 crash at Daytona, in place of nearly every spot of exposed wall.

— HANS device: NASCAR mandated the use of head-and-neck restraints in late 2001. Drivers had resisted using the U-shaped neck restraint made of carbon fiber because they found it cumbersome and restrictive. They became required equipment after 25-year-old Blaise Alexander was killed in a crash at Charlotte Motor Speedway some eight months after Earnhardt's death.

— Redesigned cars: NASCAR has developed three new cars since 2001, each one adapting to the latest technology. The latest "Next Gen" car was supposed to debut this year but was postponed to 2022 because of delays caused by the pandemic.

"The culture is what Dale Earnhardt changed," NASCAR executive Steve O'Donnell told the Associated Press. "It’s our ability to each and every day talk about technology, talk about safety and continue to have people in the industry approach us about those ideas versus just how to make the car go faster."

The Associated Press and FOX Sports contributed to this story. This story was reported from Los Angeles.