Murkowski, a former chair of the committee, said she had "some real misgivings" about Haaland, because of her support for policies that Murkowski said could impede Alaska's reliance on oil and other fossil fuels. But the senator said she would place her "trust" in Haaland's word that she would work with her and other Alaskans to support the state.

Democratic Sens. Martin Heinrich of New Mexico and Maria Cantwell of Washington state both called the committee vote historic, and both said they were disappointed at the anti-Haaland rhetoric used by several Republicans. Wyoming Sen. John Barrasso, the panel's top Republican, and other GOP senators have repeatedly called Haaland's views "radical" and extreme.

The committee vote follows an announcement by Sen. Susan Collins, R-Maine, that she will support Haaland in the full Senate. Her vote, along with Murkowski's, makes Haaland’s confirmation by the Senate nearly certain. 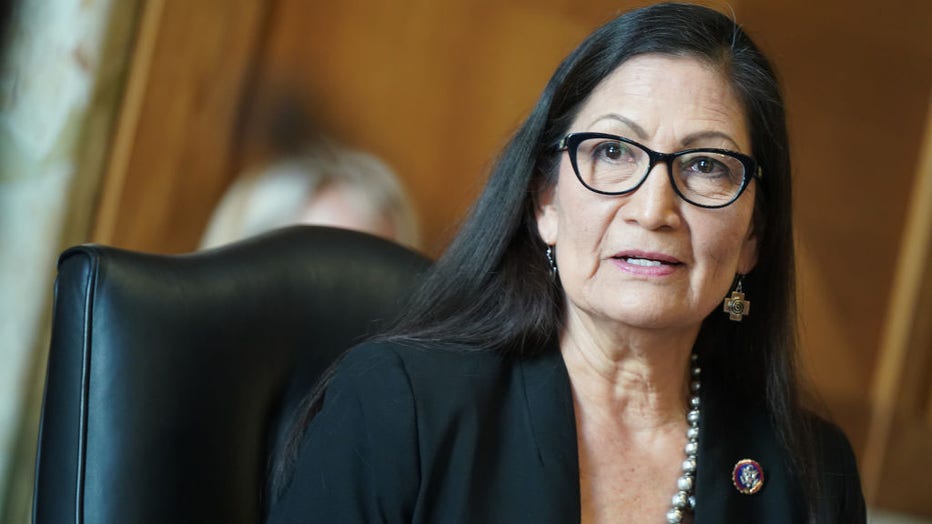 Rep. Debra Haaland (D-NM), President Joe Biden's nominee for Secretary of the Interior, testifies during her confirmation hearing before the Senate Committee on Energy and Natural Resource, at the U.S. Capitol on Feb. 24, 2021 in Washington, D.C. Rep

The interior secretary oversees the nation's public lands and waters and leads relations with nearly 600 federally recognized tribes. Haaland, a New Mexico congresswoman, has pledged that oil and natural gas will continue to play a major role in America for years to come, even as the Biden administration seeks to conserve public lands and address climate change.

Several Republicans oppose Haaland, saying her opposition to fracking, the Keystone XL oil pipeline and other issues made her unfit to serve in a role that oversees energy development on vast swaths of federal lands, mostly in the West, as well as offshore drilling in the Gulf of Mexico and Alaska.

Barrasso said a moratorium imposed by Biden on oil and gas leases on federal lands "is taking a sledgehammer to Western states’ economies.″ The moratorium, which Haaland supports, could cost thousands of jobs in West, Barrasso said.

Haaland, a 60-year-old Laguna Pueblo member and two-term congresswoman, often draws on her experience as a single mother and the teachings of her ancestors as a reminder that action the U.S. takes on climate change, the environment and sacred sites will affect generations to come.

Native Americans see Haaland’s nomination as the best chance to move from consultation on tribal issues to consent and to put more land into the hands of tribal nations either outright or through stewardship agreements.

"The historic nature of my confirmation is not lost on me, but I will say that it is not about me,'' Haaland said in her prepared testimony Feb. 22. "Rather, I hope this nomination would be an inspiration for Americans — moving forward together as one nation and creating opportunities for all of us.''

As the daughter of a Pueblo woman, Haaland said she learned early to value hard work. Her mother is a Navy veteran and worked for a quarter-century at the Bureau of Indian Education, an Interior Department agency. Her father was a Marine who served in Vietnam. He received the Silver Star and is buried at Arlington National Cemetery.

"As a military family, we moved every few years when I was a kid, but no matter where we lived, my dad taught me and my siblings to appreciate nature, whether on a mountain trail or walking along the beach,'' Haaland said.

The future congresswoman spent summers with her grandparents in Mesita, a Laguna Pueblo village. "It was in the cornfields with my grandfather where I learned the importance of water and protecting our resources and where I gained a deep respect for the Earth," she said.

Haaland pledged to lead the Interior Department with honor and integrity and said she will be "a fierce advocate for our public lands."

She promised to listen to and work with members of Congress on both sides of the aisle and ensure that the Interior Department's decisions are based on science. She also vowed to "honor the sovereignty of tribal nations and recognize their part in America’s story."

She said she fully understands the role the Interior Department must play in Biden's "build back better" plan for infrastructure and clean energy and said she will seek to protect natural resources for future generations "so that we can continue to work, live, hunt, fish, and pray among them.''