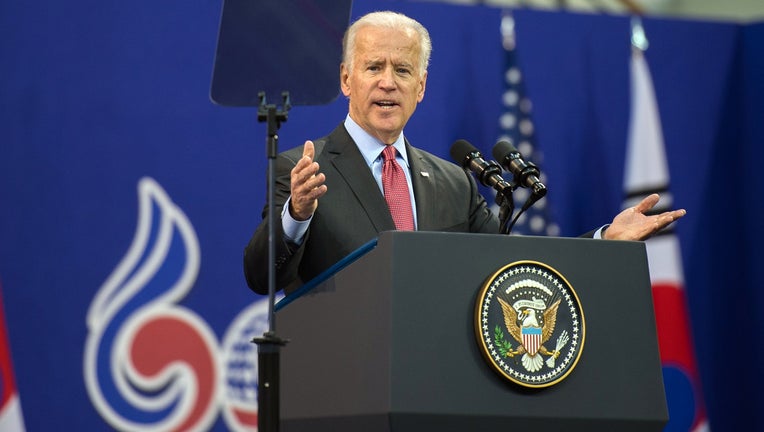 The first night, June 26 in Miami, is headlined by Sens. Elizabeth Warren of Massachusetts and Cory Booker of New Jersey, along with former Texas Rep. Beto O'Rourke.

Representatives of 20 campaigns gathered in a conference room at NBC headquarters Friday to watch slips of paper with candidates' names picked out of two boxes. There were separate boxes with the names of candidates polling at above or below 2 percent - an attempt to make sure most of the lesser-known candidates were not grouped together and given the stigma of a minor-league debate.

Still, when four of the six top-polling candidates landed on June 27, including the clear front-runner in Biden, that night was quickly seen as the one with the biggest stakes.

Being paired with Biden, 76, and Sanders, 77, gives Buttigieg an opportunity to emphasize the "next generation" theme that the South Bend, Indiana, mayor has been touting. At 37, Buttigieg is the youngest of the leading contenders.

The six female contenders will be evenly divided between the two nights. The two African American candidates, Booker and Harris, will also be on separate nights. Ideologically, two favorites of the party's liberal wing, Sanders and Warren, won't be going head-to-head, either.

Among the rest of the field, Washington Gov. Jay Inslee could find benefits in drawing the first night with fewer front-runners to emphasize his climate change-oriented effort. Former Colorado Gov. John Hickenlooper, who has been among the most aggressive critics of Sanders' democratic socialism, will have a chance to make those points to him face-to-face.

NBC will face its own test, to see if it makes compelling programming out of crowded, fractious stages on the opening nights of debate season. The debate will be shown both nights in prime time, 9 p.m. to 11 p.m., on the broadcast network, as well as on MSNBC and Telemundo, and it will be streamed on various platforms. NBC personalities Lester Holt, Savannah Guthrie, Chuck Todd, Rachel Maddow and Jose Diaz-Balart will all be featured.

"This is a terrific lineup because there will be a real debate over the key set of choices in this Democratic primary," said Sanders' campaign manager Faiz Shakir.

Already some campaigns began fundraising off the debate lineups. Biden's, Booker's, Klobuchar's and O'Rourke's campaigns are each hosting a drawing offering a trip for two to Miami, including flights, a night in a hotel and tickets to the debate, for a lucky donor.

Buttigieg's campaign sent out an email saying that appearing in "the first Democratic primary debate will allow many new people to hear Pete for the first time."

"Please consider making a donation today to make sure we're as strong as we can be heading into the debate," the Buttigieg email said.

Delaney's campaign said he was "pleased to be sharing the debate stage with many strong candidates, particularly Senator Warren who, like me, is talking about new ideas. I look forward to a debate on issues and solutions, not personality and politics."

Advisers of several leading campaigns have argued that debates are, for their candidates, as much about avoiding bad moments as they are about making any gains in the race. For the rest of the field, the national stage is a chance for that rare viral moment that elevates a struggling campaign.

At least one Republican veteran of crowded primary fights warned Democrats against putting too much stock in debates with so many candidates. "I've talked to some campaigns who say, 'Our plan is to do well on the debate stage,' but that's like saying you plan to get struck by lightning,'" said John Weaver, a Republican adviser to John McCain's presidential runs and more recently to then-Ohio Gov. John Kasich's 2016 effort.

Debates become more important, Weaver said, "as this gets whittled down."