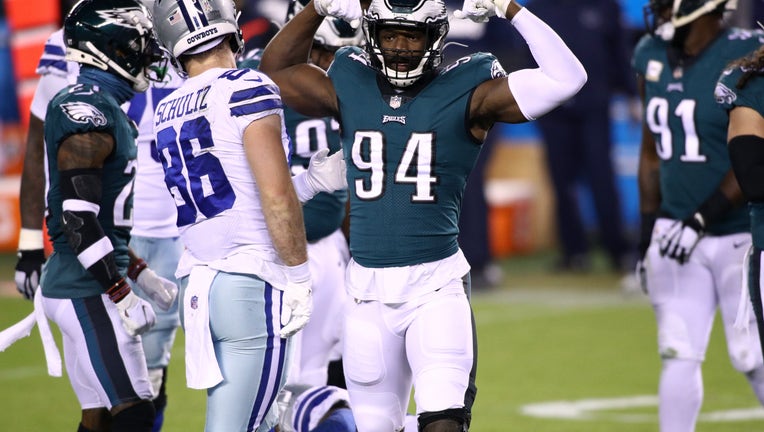 PHILADELPHIA, PA - NOVEMBER 01: Philadelphia Eagles Defensive End Josh Sweat (94) celebrates a defensive stop in the second half during the game between the Dallas Cowboys and Philadelphia Eagles on November 01, 2020 at Lincoln Financial Field in Phi

PHILADELPHIA - The preseason favorites in the NFC East are set to meet in Week 16 without their franchise quarterbacks starting and with their playoff hopes in the hands of a team that didn’t figure to be in the running this late.

Believe it or not, the pandemic has nothing to do with Jalen Hurts and the Philadelphia Eagles visiting Andy Dalton and the Dallas Cowboys on Sunday with everybody from both teams probably wondering what’s happening in a game that kicks off 20 minutes earlier in Washington.

Philadelphia (4-9-1) benched Carson Wentz three games ago, and Hurts won his first career start before another solid showing by the rookie in a 33-26 loss to Arizona pushed the defending NFC East champion to the brink of elimination.

The Cowboys (5-9) have stayed alive by winning consecutive games for the first time in coach Mike McCarthy’s first season, with Dalton improving to 3-4 as the starter after Dak Prescott’s season-ending ankle injury in Week 5.

The only way the winner between the teams that have combined to win the past four division titles can keep that run going is if Washington loses to Carolina. Washington’s start was moved back three hours, making the games almost simultaneous.

"We know that we’ve been in those situations before, but I would prefer to go into a game not knowing," Eagles coach Doug Pederson said. "I think it does give you a level of concentration and focus that you need going into a football game. Once we tee it up on Sunday, we’re all about the game, we’re into the game, we’re coaching and playing, and we’ll see what happens at the end."

Both teams have dealt with plenty of injuries, the Cowboys hardest hit on the offensive line while the Eagles have had issues there and in the receiving group. But poor play has been an issue as well, mainly with the Dallas defense and Wentz among other things for the Eagles.

"It’s been an emotional season not only for us, but for everybody with what we’ve been dealing with," said Dallas linebacker Sean Lee, who was sidelined early in the season by a core muscle injury but could make the first start of his 11th season with Leighton Vander Esch likely out because of a high ankle sprain. "But I’m excited where we’re at, I’m excited to help. I’m proud that I’ve been able to fight back and help."

Dallas running back Ezekiel Elliott is hoping to play despite an ailing calf that kept him out of a game because of injury for the first time in his career in last week’s 41-33 win over San Francisco. The two-time rushing champion didn’t practice last week while planning to be ready against the Niners. Elliott says he’s further along this week.

"Obviously with the rest this weekend it’s got me feeling better," he said. "I actually got out there a little bit at practice this week, ran around in team drills so I mean it’s definitely making the right steps to be ready for Sunday."

Since 2017 when they won the Super Bowl, the Eagles are 11-2 in games they must win or they’d be eliminated from the playoffs or mathematically knocked out of contention.

"If I had it any other way, I’d rather be playing our best at the beginning and you sustain that throughout the year, but I don’t know what it is really," Pederson said. "I think our guys respond well to adversity. We’ve been faced with that the last couple of seasons."

"When you’re in the dry spell, you feel like it will never come," said defensive coordinator Mike Nolan, who has been the subject of speculation in the first year of his Dallas tenure with the Cowboys on the verge of a franchise record in points allowed while being last in the NFL in run defense.

"But I think as we’ve said all along we’re just in the process of trying to become some things that we weren’t in the past, one of them being a team that gets some turnovers. But you can’t just talk about it. You have to work on it."

Cornerback Darius Slay is expected to return after missing one game because of a concussion, but the Eagles will still be without starting safety Rodney McLeod (ACL tear) and starting cornerback Avonte Maddox (knee). Arizona’s Kyler Murray took advantage of a secondary missing three starters and threw for a career-best 406 yards.

Safety Jalen Mills was the only available starter against the Cardinals, so the Eagles relied on Michael Jacquet, Kevon Seymour, K’von Wallace and Marcus Epps.

"If you guys were able to come to our practices, you would see a significant portion of our team staying afterward," Schwartz said. "They’re hungry for meetings. They can’t be in meetings in person. It’s really changed. Guys are always hardworking. It’s really just changed the avenues that they’re able to get some extra seasoning and get some extra attention."