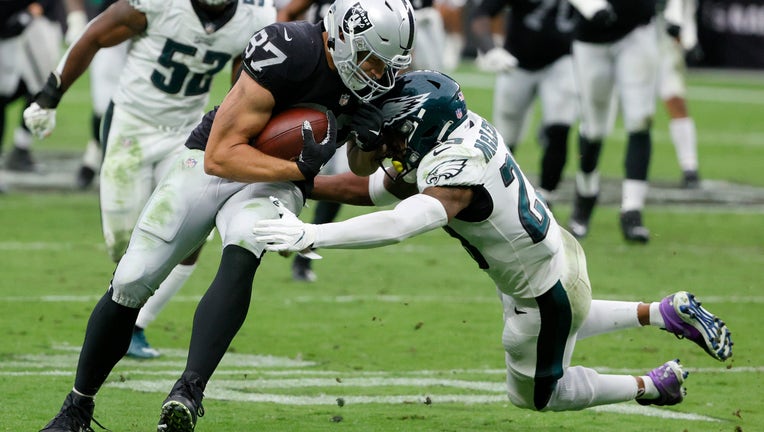 LAS VEGAS, NEVADA - OCTOBER 24: Tight end Foster Moreau #87 of the Las Vegas Raiders is tackled by safety Rodney McLeod #23 of the Philadelphia Eagles after a 21-yard pass play during their game at Allegiant Stadium on October 24, 2021 in Las Vegas,

As Gannon spoke to reporters Tuesday, gusts of damp fall wind swept through the open-sided tent where the Eagles hold news conferences.

The weather was a reminder that the 2021 season is no longer young, and any grace period that might have been granted to a coach teaching players a new system has passed.

In a 33-22 loss at Las Vegas, the Eagles allowed Raiders quarterback Derek Carr to complete 31 of 34 passes for 323 yards and two touchdowns. Carr’s 91.2% completion rate was the second highest by a QB throwing at least 30 passes in NFL history.

And, it’s been a common theme against Gannon’s defense. Quarterbacks are completing passes at a 74.4% rate against the Eagles this season. If that holds up, it will break the NFL record of 72.7% set by the Detroit Lions in 2016.

Gannon acknowledged Tuesday that his soft coverage schemes, designed to avoid giving up big plays, have not stopped a flood of opposing touchdowns.

Opponents are taking more time to score than they would if they were hitting 80-yard plays, but the result is often the same, with the added problem that Philadelphia’s offense is kept off the field for prolonged periods. As a result, the offense struggles to establish a rhythm as coach Nick Sirianni noted on Monday.

After the loss, Sirianni said Gannon’s defense needed to challenge offenses more, though Gannon said Tuesday that the "challenge" wording actually came from him, as he and Sirianni conferred at the end of the game.

Six-time Pro Bowl defensive tackle Fletcher Cox, the unit’s biggest star, called out Gannon’s scheme and questioned the way he is being used. Cox complained that instead of aggressively trying to split double teams, he is having to read and react, making it easier for opponents to stymie him. Then veteran safety Rodney McLeod said "we just play what’s called," when asked about coverages, which typically are undisguised and easy to defeat.

Gannon still thinks his players believe in what he is asking them to do.

"I’m confident in that because, when we go out and install the game plan, they’re juiced up," Gannon said. "When we explain to them, ‘Hey, here’s why we’re doing what we’re doing,’ they understand, and you see it in practice, and you see it in the game. They are trying to do what we want them to do. We have to set it up a little bit better."

Gannon said Cox was right about not being used to his best advantage.

"Our entire defense is frustrated that we’re 2-5 right now, because we know we’re not playing well enough," Gannon said. "He’s got good points. I need to do a better job of that with him. The key thing with that is, together, player and coach, coach and player, how we do that. ... He’s had some very good ideas, as our other players have ... it’s up to us as the coaches to get that done."

Gannon’s 3-4 concept seems ill-suited to the Eagles’ talent because it places a lot of stress on the linebackers, the team’s weakest personnel group. Gannon said he had "a lot of input" in offseason personnel discussions, and that he believes his unit has the talent to play winning defense. He said he and his staff have spent the time since the Las Vegas loss pondering how to better deploy their players going forward, starting this weekend at winless Detroit (0-7).

"When things aren’t going great, (you have to examine) what are we asking this guy to do? How are we coaching it? What are we saying to the guy to improve the player?′ " Gannon said.

NOTES: With Joe Flacco traded back to the Jets, Gardner Minshew becomes the backup QB. Offensive coordinator Shane Steichen said Minshew is "really intelligent. He’s a football junkie." ... RB Jordan Howard will most likely be promoted from the practice squad against Detroit because Miles Sanders is out with an ankle injury. ... Eagles special teams coordinator Michael Clay said the harder-than-expected Las Vegas surface caused a freak bounce that foiled kicker Jake Elliott’s attempt to field the onside kick the team tried at the start of the second half Sunday.