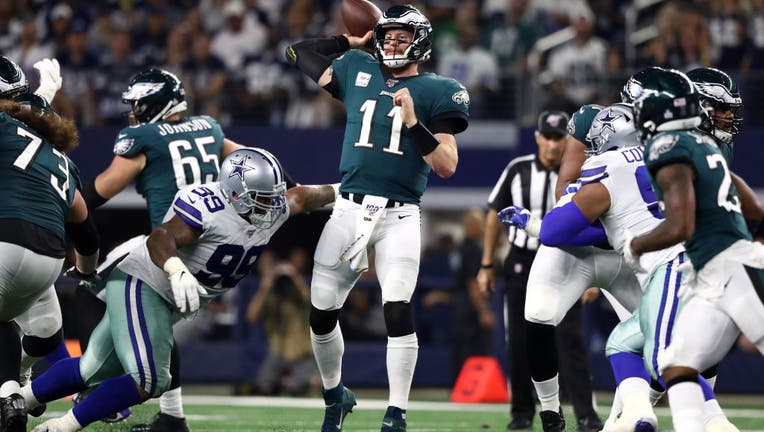 ARLINGTON, TEXAS - OCTOBER 20: Carson Wentz #11 of the Philadelphia Eagles throws a pass during the first half against the Dallas Cowboys in the game at AT&T Stadium on October 20, 2019 in Arlington, Texas. (Photo by Ronald Martinez/Getty Images)

PHILADELPHIA - Ezekiel Elliott ran over safety Malcolm Jenkins on his way to 111 yards and a touchdown, Dak Prescott threw an easy scoring pass on a great fake to his star running back before a TD run and the Cowboys rolled to a 37-10 victory over the Philadelphia Eagles on Sunday night.

The Cowboys (4-3) won with the NFC East lead on the line while ending a three-game losing streak that followed their 3-0 start and clouded high expectations for the defending division champs.

Carson Wentz threw an interception and had two of Philadelphia's three lost fumbles. The Eagles (3-4) dropped their second straight game after a two-game winning streak that looked like it might get their season going.

Brett Maher finished the highest-scoring half against Doug Pederson since he became coach of the Eagles in 2016, kicking a 63-yarder on the final play before halftime for a 27-7 lead.

Maher, the only kicker in NFL history with multiple field goals of at least 62 yards, now has three after kicking a 62-yarder last week against the New York Jets. His other from 62 was against the Eagles last season, his first in the league.

Prescott's 8-yard scoring run was the 21st of his career, breaking Roger Staubach's record of 20 rushing TDs by a quarterback.