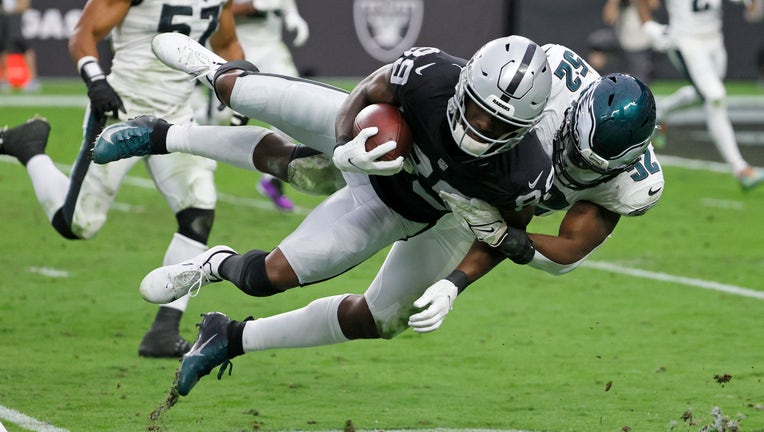 LAS VEGAS, NEVADA - OCTOBER 24: Bryan Edwards #89 of the Las Vegas Raiders is tackled by linebacker Davion Taylor #52 of the Philadelphia Eagles after a 24-yard pass play during their game at Allegiant Stadium on October 24, 2021 in Las Vegas, Nevada

PHILADELPHIA - It wasn’t a huge surprise Wednesday when the Philadelphia Eagles waived Eric Wilson, the free agent they’d signed in the offseason to lead their linebacking group.

In some cities it might have been, but not in Philadelphia. The linebackers room has been the Eagles’ Bermuda Triangle for more than a decade now.

One problem has been a lack of high-round draft capital expended at the position. As Eagles fans hear every spring before the draft, the last linebacker their team took in the first round was Jerry Robinson — in 1979. The Eagles’ last second-round linebacker was Mychal Kendricks, in 2012.

Another problem has been a string of disappointing free agent signings such as Wilson, a solid five-year performer for the Minnesota Vikings who compiled the worst Pro Football Focus grades of his career in the seven games he played this season for the Eagles before being inactive in last Sunday’s victory at Detroit.

Whether because of injury or ineffectiveness, the Eagles have come up empty on a half-dozen signings of veteran linebackers over the past four seasons. In 2018, it was Paul Worrilow and Corey Nelson. In 2019, L.J. Fort and Zach Brown. In 2020, Jatavis Brown retired before getting a chance to disappoint.

Eagles coach Nick Sirianni on Wednesday cited the development of second-year linebacker Davion Taylor as one factor leading to Wilson’s departure. Taylor is a fast but raw 2020 third-round draft choice from Colorado who practiced but didn’t play football in high school because game times conflicted with his family’s religious beliefs.

Given that Taylor is the highest-drafted Eagles linebacker since Kendricks, his development has seemed painfully slow to many observers. His 43.2 overall PFF grade this season is poor, but it reflects a small sample size, just 76 defensive snaps.

That total includes a season-high 39 against the Lions, a game in which Taylor graded out at 69.7. And that 43.2, meager as it is, still is higher than Wilson’s career-low 35.2 overall PFF grade this season, compiled over a span of 173 snaps.

"He was a great guy, a great leader. I learned a lot from him while he was here," Taylor said Wednesday when asked about Wilson’s departure. "Him not being in the locker room, I’m sad about it, because I looked up to him, but that’s just how the business goes. Now I’m just ready to take up my opportunity and take advantage of that."

Taylor has been a diligent student, but he’s had to make up a lot of ground, with plenty remaining to be covered. He played just two years at Colorado and lacks the feel for situations that experience brings — the instincts that are crucial to linebacking.

NFL teams rarely tackle in practice once the season starts. You can pounce on tackling dummies, but figuring angles and gauging speed doesn’t happen unless you’re in the games.

Defensive coordinator Jonathan Gannon said Tuesday he decided the Detroit game was a good time to give both Taylor and third-year linebacker T.J. Edwards more snaps.

"Both of those guys, we felt, did a pretty good job playing winning football," Gannon said.

The Eagles’ 44-6 victory sped up Wilson’s departure and ensured that both linebackers will get more opportunities.

"I never saw it as a bad thing that I was raw. I always saw it as an opportunity, just to keep on getting better and see how good I can actually become in this league," Taylor said.