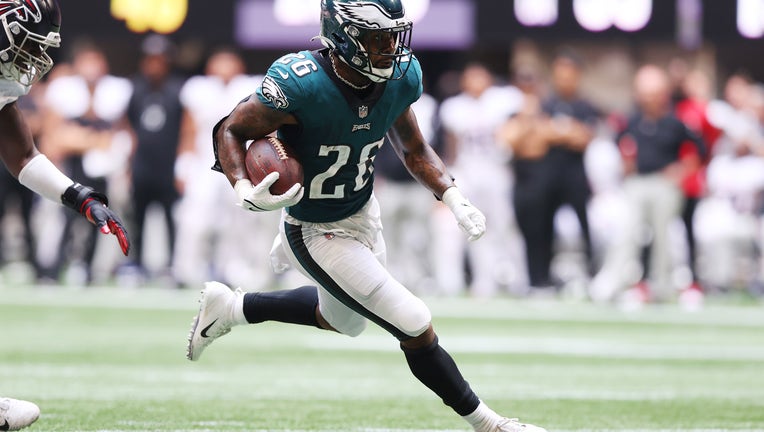 ATLANTA, GEORGIA - SEPTEMBER 12: Miles Sanders #26 of the Philadelphia Eagles runs with the ball against the Atlanta Falcons at Mercedes-Benz Stadium on September 12, 2021 in Atlanta, Georgia. (Photo by Todd Kirkland/Getty Images)

PHILADELPHIA - The Philadelphia Eagles set a franchise record Monday night that they are not eager to celebrate.

They handed the ball to their running backs only three times among 53 snaps in a blowout loss to the rival Dallas Cowboys.

Fans and other observers were dumbfounded.

Miles Sanders, who got two of those carries for 27 yards, said his goal in speaking with reporters on Wednesday afternoon was to "just quiet all that down."

Sanders had his work cut out for him.

As the Eagles picked up the pieces from their 41-21 loss at Dallas and began preparing for this week’s visit from Kansas City, questions about first-year head coach Nick Sirianni’s play-calling led a long list of pertinent topics arising from that NFC East debacle.

Since the Eagles drafted Sanders in the second round, 53rd overall, in 2019, he has produced the fourth-most scrimmage yards per touch among NFL running backs with at least 300 touches.

In addition to the career-low two carries, Sanders caught three passes for 28 yards. The Eagles couldn’t get much going with one of their most potent playmakers on a night when they struggled to move the ball consistently.

"He’s a pivotal part of this offense, one of the top running backs in the league, he’s gotta get his," second-year quarterback Jalen Hurts said Wednesday, when asked about Sanders.

Earlier in the day, Sirianni said he didn’t want to specify a target number of touches for Sanders, then added: "Does he need more than five touches? Of course. The way the game went, he didn’t get that. … There’s no doubt, we’ve got to get our playmakers the ball. He’s a playmaker. He’s shown that he’s a playmaker."

Sanders said he "didn’t dwell on it too much," Monday night. "It is what it is. I can only control what I can control. The game was pretty much out of hand early, so I could see why the game plan ... didn’t go as planned. It’s kind of like a panic in there throughout the whole team, you know, just based on the way that the game went.

"I didn’t question it, didn’t show any type of emotion, just kept playing the game. ... I’m not over here saying what y’all really want me to say, I’m just here to (deaden) all this. It’s on to the next week."

Sanders said Hurts reached out to all the running backs after the loss, emphasizing that there are a lot of games left.

The loss was troubling, though, as Sirianni and Hurts attempt to establish themselves.

"It starts with me," Hurts said Wednesday. "I’ll be better for this team."

Sanders stood up for his QB.

"It’s one week, man. Second-year quarterback. He’ll be all right," Sanders said. "We’re all going to be all right. We’re all behind him. We ain’t doubting nobody."

Later on, Sanders said that "I do believe, to have a successful offense, you have to run the ball," and added that "I can sit here and tell you what I think we should do, but I’m not a coach."

Hurts’ mistakes in his seventh NFL start were among the most notable problems Monday night, and Hurts said afterward that the loss was on him.

Asked about that Wednesday, Sirianni said: "I don’t think that’s fair for him to, say, take the blame for a loss." He added that he liked Hurts’ willingness to be held accountable.

Hurts said better times will come for the 1-2 team, which faces a punishing run of games against the Chiefs, Panthers, Bucs and Raiders.

"This whole nucleus we have here, we’re all growing, we’re all together, we’re all finding each other and creating an identity," Hurts said. "It’s coming."

NOTES: The Eagles promoted OL Sua Opeta from the practice squad, with OL Isaac Seumalo out for the season. They added OT Casey Tucker and DE Cameron Malveaux to their practice squad … Wednesday was a walkthrough practice, but the team projected that S Rodney McLeod (knee) would have been a full participant, which is encouraging … OT Jordan Mailata (knee) did not practice.