An Easton Area School District bus with students on board crashed into a creek; multiple injuries reported

EASTON, Pa. - An Easton Area School District bus that was carrying more than two dozen students crashed through a guard rail and into a creek Monday morning.

The crash occured around 8 a.m. along Bushkill Drive. The bus went through the guard rail before heading down a 50 foot embankment and into the creek.

Easton Police Sgt. Joseph Alonzo said 29 middle school students were aboard the bus when it crashed.

FOX 29 cameras were there Monday morning as crews worked to remove a bus from Bushkill Creek after it crashed into the water with more than two dozen students on board.

"To go through a guardrail, you have to strike that with some serious force, just to be able to get through that and through those trees. You have to take the factor or the weight of the bus into it and the speed of the bus and go from there," Sgt. Alonzo explained. 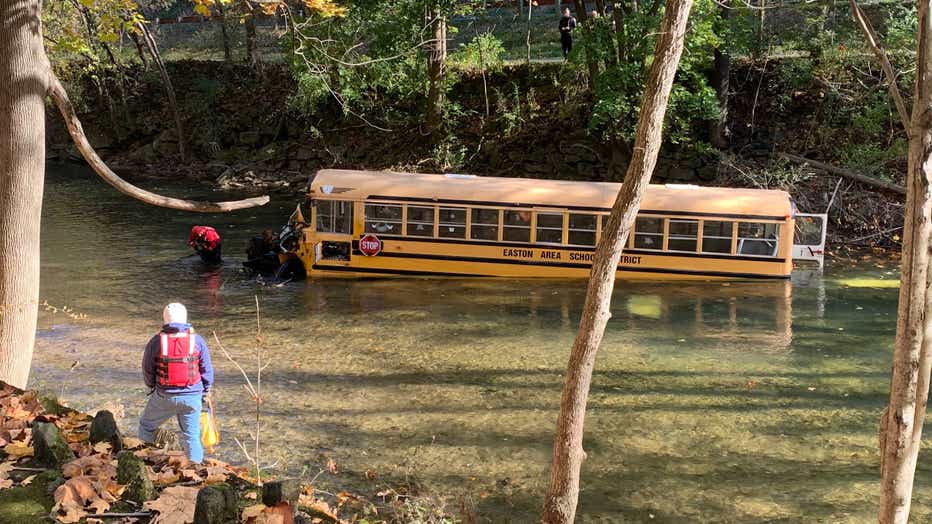 Sgt. Alonzo says nine people were injured and taken to the hospital following the crash, including the driver. He says those injuries appear to be minor, and no one was critically injured.

Of those injured, seven were taken by ambulance to St. Luke's in Anderson or St. Luke's in Easton. Two students were recommended for assessment at the hospital and were transported by their parents.

Officials say everyone got out of the bus through the emergency exit by the time first responders arrived.

Officials did not release information regarding the victims injuries.

An Easton Area School District bus that was reportedly carrying 30 students crashed through a guard rail and into Bushkill creek early Monday morning.

The remaining students were released to their parents once assessments were done.

"That bus rolls on its side or on its roof and it’s into the water fully. Then we’re talking about a much bigger problem than what we have," Sgt. Alonzo commented.

School officials say while the district, like many, is facing a bus driver shortage, they don’t believe that was a factor.

The driver is cooperating with police and many family members are anxiously awaiting answers.

Easton police are conducting an investigation, including an accident reconstruction.