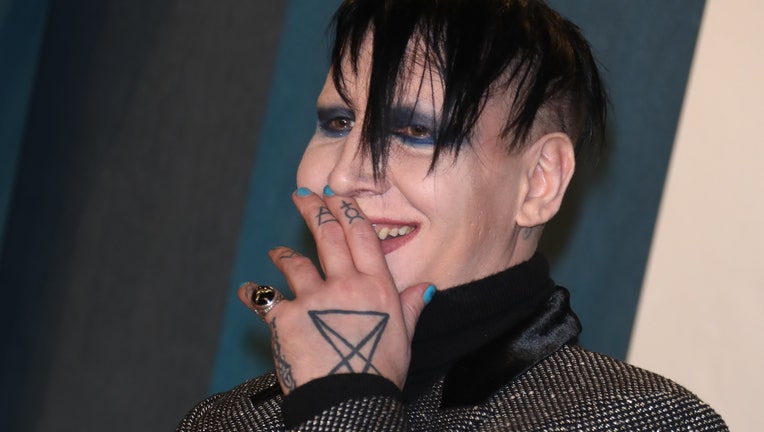 Loma Vista Recordings and AMC Networks announced they are severing ties with singer Marilyn Manson after allegations of abuse from several women, including his ex-fiancé and actress Evan Rachel Wood.

"In light of today’s disturbing allegations by Evan Rachel Wood and other women naming Marilyn Manson as their abuser, Loma Vista will cease to further promote his current album effective immediately," the record label posted on Twitter Monday. "Due to these concerning developments, we have also decided not to work with Marilyn Manson on any further projects."

Wood, who stars on HBO's "Westworld," had spoken frequently in recent years about being abused in a relationship but did not name the person until she posted Monday on Instagram.

"The name of my abuser is Brian Warner, also known to the world as Marilyn Manson," she wrote. "He started grooming me when I was a teenager and horrifically abused me for years."

Wood and Manson's relationship became public in 2007 when he was 38 and she was 19, and they were briefly engaged in 2010 before breaking up.

"I was brainwashed and manipulated into submission," she explained. "I am done living in fear of retaliation, slander, or blackmail. I am here to expose this dangerous man and call out the many industries that have enabled him, before he ruins any more lives. I stand with the many victims who will no longer be silent."

Manson was also set to star in the upcoming episode of AMC’s "Creepshow." The cable television network confirmed to FOX Television Stations that his segment in season two will no longer appear.

In 2018, Los Angeles County prosecutors declined to file charges against Manson over allegations of assault, battery and sexual assault dating to 2011, saying they were limited by statutes of limitations and a lack of corroboration. The accuser in that case was identified only as a social acquaintance of Manson's.

He strongly denied the allegations through his attorney at the time.

According to Vanity Fair, at least four other women came forth with allegations against Manson. The women claimed they have endured "sexual assault, psychological abuse, and/or various forms of coercion, violence, and intimidation."

Vanity Fair also said Manson has denied similar allegations in the past.

In 2018, Wood testified about her abuse to a House Judiciary subcommittee as she sought to have a Sexual Assault Survivors' Bill of Rights passed in all 50 states.

"My experience with domestic violence was this: Toxic mental, physical and sexual abuse which started slow but escalated over time," she told the committee.

She also testified before California legislators on behalf of the Phoenix Act, a bill she created to expand the statute of limitations for crimes involving domestic violence according to FOX News. It went into effect in January 2020.

Manson representatives Rick Roskin and Emma Banks of Creative Artists Agency did not immediately respond to an email seeking comment.

FOX News and the Associated Press contributed to this story. The story was reported from Los Angeles.