A North Carolina&nbsp;man says he is now in social media jail on Facebook after he tried to post an Air Force insignia as his cover photo.

DENVER, N.C. - A North Carolina man says he is now in social media jail on Facebook after he tried to post an Air Force insignia as his cover photo. 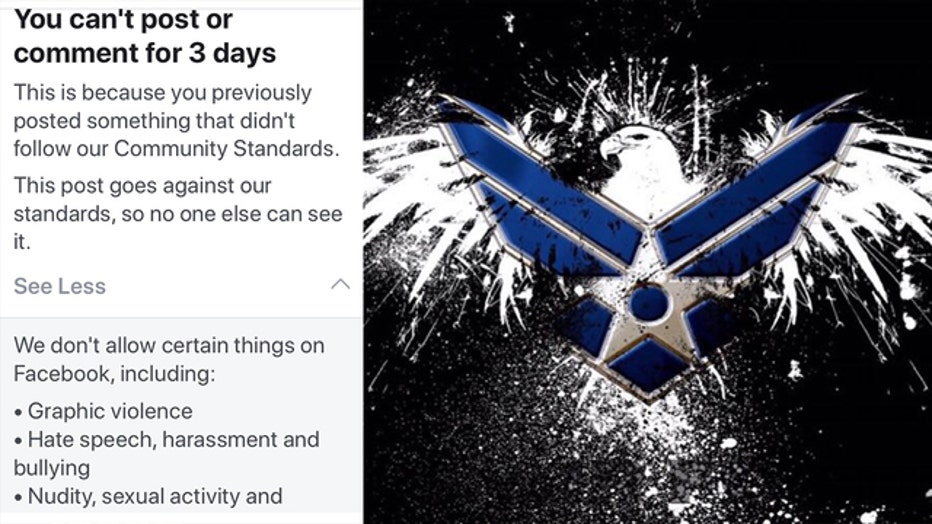 When you arrive at the Weiss home, the stars and stripes fly free outside.

In the age of social media, Weiss wanted to support his son, who is an Airman, by posting the insignia. He was surprised Facebook locked his account for the image, saying it violated guidelines including “graphic” material and “hate speech”.

"I am trying to post something that is purely American and purely for the military and I don't consider that hate speech," he told FOX 46 Charlotte. "I am really angry, extremely angry that Facebook would consider this hate speech, but allow real hate speech to go through."

He posted the same image multiple times, always getting the same response.

"It's as if their algorithm has locked onto that image and automatically shuts it down,” said Weiss.

"This is how we communicate. This is the way you communicate these days with everybody. So I would love to get away from Facebook and I have thought about it, but it's very difficult,” he said.

For now, he just wants an apology or response from the social media giant.

FOX 46 Charlotte reached out to Facebook for a response or explanation, but has not heard back.