A mother, her two children and their dog needed to be rescued when heavy downpours caused floodwaters to overcome a street.

CALN TOWNSHIP, Pa. - A mother, her two children and their dog needed to be rescued from a car when heavy downpours caused floodwaters to overcome a street in Chester County.

A local photographer shared images and video of the rescue that happened on South Bailey Road near Lincoln Highway in Caln Township on Thursday afternoon.

"My son helping kids out. He just rescued a kid. Way to go, Joe," said Kathleen Hilferty on the smartphone video she captured as her son 21-year-old son jumping into action to help the stranded motorists.

Hilferty is heard narrating the water rescue spearheaded by her son Joe. He was putting air in his truck tires at the Wawa on Lincoln Highway in Thorndale when he saw a car stuck in rising waters under the train overpass near SEPTA's Thorndale Regional Rail Station.

"Once she started screaming for help, I jumped right over," said Joe.

"As soon as I rolled down their window or their mother rolled down the window they stopped crying. I soothed them. Helped them and told them it was going to be okay," said Hilferty. 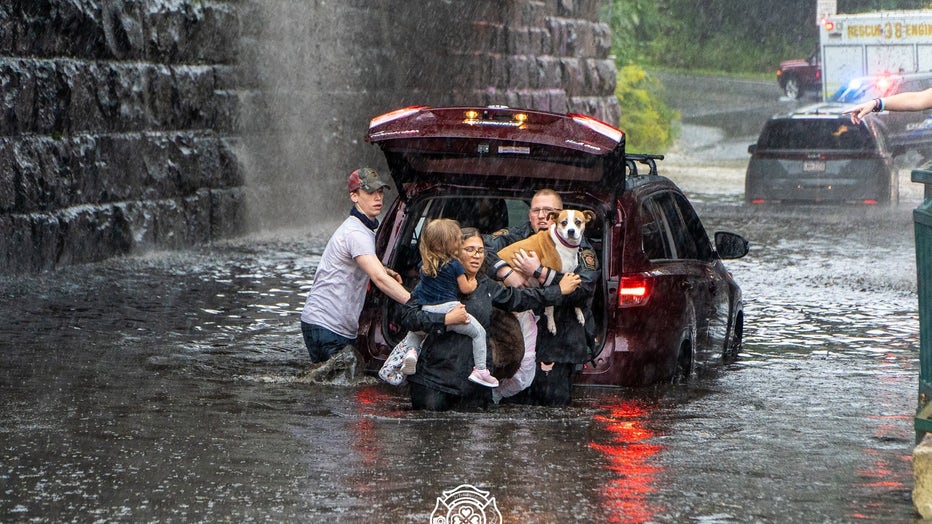 A local photographer captured a family being rescued from a flooded car in Caln Township. Credit: IrishEyez Photography

Just as he was helping the family escape a Pennsylvania state trooper who was patrolling the area stopped to help.

Hilferty, who is a driver for UPS, says there was no question he was going to help even if it meant getting a little wet.

"I had to. My mother raised me that way. If people are in need of help go help them," Joe explained.

"I think my son is a hero. Every other day he does something that surprises me." Kathleen added.

She says helping out is what her son does. Just this time it was caught on video.

"He has a special needs brother that is a twin brother that has a chronic illness and maybe that’s where he got it from. I'm a proud mom," she said.

After helping with the rescue, Joe says he never even got the family's name he helped save but says he hopes someone would do the same for his mom.