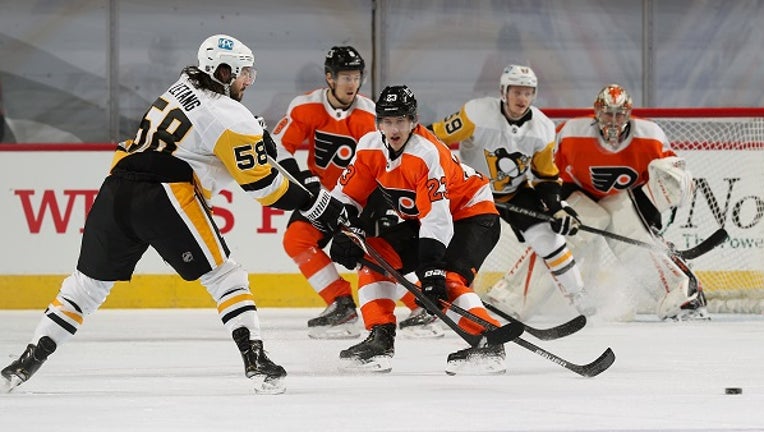 PHILADELPHIA, PA - JANUARY 13: Kris Letang #58 of the Pittsburgh Penguins passes the puck against Oskar Lindblom #23 of the Philadelphia Flyers in the first period on January 13, 2021 at the Wells Fargo Center in Philadelphia, Pennsylvania. (Photo by

PHILADELPHIA - Nolan Patrick missed last season with debilitating migraines and Oskar Lindblom had his shortened in his fight with a rare bone cancer. The only cheers they heard in their comeback games came in the locker room before faceoff in the form of rousing approval from the Philadelphia Flyers, grateful their teammates could play.

Flyers coach Alain Vigneault wished a packed arena — that last season had fans holding #OskarStrong signs — had a chance to show their appreciation.

"My one disappointment is that Oskar played his first game in Philadelphia since December 2019 and he didn’t get a chance to play it in front of Flyers fans giving him the great cheer and love that he deserved from coming back and battling cancer," Vigneault said.

With Gritty thrusting his bulbous belly from his sofa, the Flyers turned the NHL opener into a memorable one.

Joel Farabee had a goal and three assists, Michael Raffl, James van Riemsdyk and Patrick also scored to lead the Flyers to a 6-3 win over the Pittsburgh Penguins on Wednesday.

The 22-year-old Patrick, the No. 2 overall pick in the 2017 draft, scored in his first game since April 2, 2019. Lindblom, who returned to play in the NHL restart bubble, nearly scored a goal when a puck that went off his helmet was credited to a teammate.

"They had their own journeys and we’re just happy they’re back," Farabee said.

The unconventional opener was decided when Raffl scored from the slot and beat Tristan Jarry 5:37 into the third for a 4-3 lead and the only cheers for the go-ahead goal came from Flyers fans watching at home.

The Flyers pounced from there — Travis Konecny and Kevin Hayes scored 20 seconds apart to turn this one into a rout.

Crosby’s goal was about expected against a team he has tortured like no other. He was greeted by strange silence in the empty arena — 20,000 Flyers fans generally lose their minds chanting "Crosby sucks!" — and he simply skated away without a boo to be heard after his tying goal.

Crosby’s 44th goal against the Flyers, more than any other team in the league, in 71 games was one of his best. Carter Hart tried to clear the puck from behind the net and his lazy pass was batted down by Crosby and poked in an empty net to make it 2-2.

Jankowski, who scored just five goals last season, scored the first one of this season 5:12 into the game. Tanev beat Hart, who had 31 saves, early in the third to make it 3-3.

"I think it’s just how the puck goes and the bounces," Tanev said. "They weren’t going our way. I thought we played a great game. I thought we had a lot of great chances."

Erik Gustafsson had to settle for assists on two shots that seemed destined to find the back of the net in the first period. His first slapper knocked off van Riemsdyk’s stick to tie it 1-1. Gusafsson’s next shot was deflected by Patrick with 7.8 seconds to make it 2-1.

"It was a really good shot by Gus to get it through and I was able to get a stick on the puck and tip it in," van Riemsdyk said.

Farabee scored late in the second period to put the Flyers ahead 3-2 in a game that — minus Gritty’s shenanigans -- had all the atmosphere of a morning skate.

"It was a weird offseason. My mindset was just to stay ready," the 20-year-old Farabee said.

Farabee had assists on van Riemsdyk, Patrick and Hayes’ goals.

The Flyers will allow one family per game inside the Wells Fargo Center that represent frontline and essential workers who worked in the community in the battle against COVID-19. Josh and Amanda Hathaway, who both work at St. Mary’s Medical Center in Langhorne, Pennsylvania, and one of their children had the lucky perch above the Flyers’ bench.

The Penguins and Flyers play again Friday in Philly as part of a packed, 56-game schedule necessitated by the pandemic. The schedule realignment added Boston to a revamped, travel-friendly East Division that included the Capitals, Penguins, Rangers and Islanders.

"Short training camp, new people coming in and just trying to get the chemistry down," Penguins defenseman John Marino said. "I don’t think anyone in the locker room is worried about it."