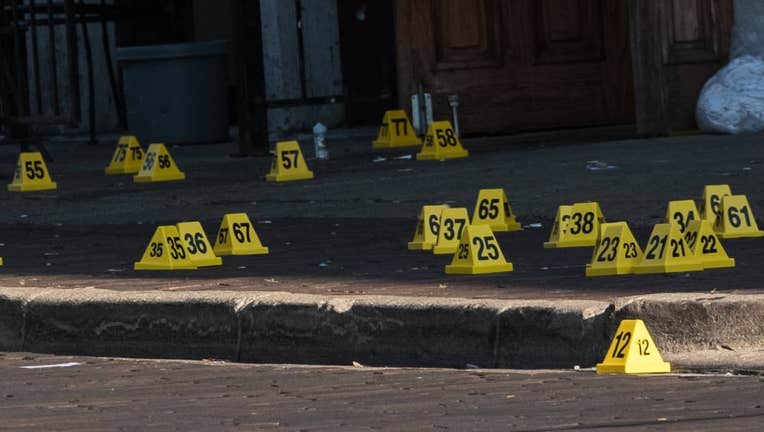 DAYTON - The shooter who killed nine people in Dayton, Ohio, had expressed a desire to commit a mass shooting and showed an interest in violent ideology, investigators said Tuesday as the FBI announced it is opening an investigation.

Federal investigators will try to determine what ideologies influenced 24-year-old Connor Betts, who might have helped him or knew in advance of his plan, and why he chose the specific target of Dayton's Oregon entertainment district for the shooting early Sunday, said Special Agent Todd Wickerham, the head of the FBI's Cincinnati field office.

Dayton Police Chief Richard Biehl said Betts had "violent ideations that include mass shootings and had expressed a desire to commit a mass shooting."

Wickerham didn't say whether the FBI is looking at if the case could be treated as domestic terrorism, as the agency has done in the El Paso, Texas, mass shooting earlier in the weekend. He said Betts hadn't been on the FBI's radar. He declined to discuss what specific ideologies might be linked to Betts' actions but said there was no evidence so far that they were racially motivated.

Meanwhile, public conversation around the shooting shifted Tuesday toward how to address people with mental health issues who might pose a threat of violence, as a woman who briefly dated the gunman recounted their bonding over struggles with mental illness and the governor called for more mental health support along with gun safety measures.

Investigators haven't publicly offered a motive for why Betts, wearing a mask and body armor, opened fire with an AR-15 style gun outside a strip of nightclubs in Dayton early Sunday, killing his sister and eight others before officers fatally shot him less than 30 seconds into his rampage.

A woman who said she briefly dated him earlier this year wrote in an online essay that Betts had "dark thoughts," including about wanting to hurt people. Adelia Johnson, 24, said they met in a college psychology class and bonded over dealing with mental illness, which she said allowed Betts to open up to her.

Johnson said she was in treatment but that Betts "didn't want to seek help because of the stigma." He told her he thought he had mental illnesses including bipolar disorder, she said.

"When he started joking about his dark thoughts, I understood," she wrote. "Dark thoughts for someone with a mental illness are just a symptom that we have to learn how to manage."

Johnson said on their first date, Betts showed her a video of the Pittsburgh synagogue shooting. She said Betts had "uncontrollable urges" that she called "red flags," which eventually led her to call things off in May. When she broke up with him, she said she reached out to his mother to express her concern, but she didn't elaborate on what they discussed.

It's unknown whether any of the Dayton victims were targeted . Besides Betts' sister Megan, 22, the others who died were Monica Brickhouse, 39; Nicholas Cumer, 25; Derrick Fudge, 57; Thomas McNichols, 25; Lois Oglesby, 27; Saeed Saleh, 38; Logan Turner, 30; and Beatrice N. Warren-Curtis, 36.

Betts was white and six of the nine killed were black, but police said the speed of the rampage made any discrimination in the shooting seem unlikely.

Hospital officials said 37 people have been treated for injuries, including 14 with gunshot wounds.

The shooting and another mass shooting in El Paso, Texas , over the weekend left 31 people dead and more than 50 injured in less than 24 hours.

Johnson's comments add to a conflicting picture emerging of Betts, with some people defending him as a nice guy and friendly neighbor while former schoolmates recall a troubled teenager.

Two former classmates told The Associated Press that Betts was suspended from Bellbrook High School after a hit list was found scrawled in a school bathroom. That followed an earlier suspension after Betts came to school with a list of female students he wanted to sexually assault, according to the two classmates, a man and a woman who spoke on condition of anonymity out of concern they might face harassment.

Others remembered how he tried to intimidate classmates.

"It's baffling and horrible that somebody who's been talking for 10 years about wanting to shoot people could easily, so easily, get access to a military grade weapon and that much ammo," said Hannah Shows, a former high classmate who remembered seeing Betts look at people and imitate shooting at them.

"He was someone who enjoyed making people afraid," she said.

"The Connor Betts that I knew was a nice kid," Howard said.

Bellbrook-Sugarcreek Schools wouldn't comment and refused to release information about his student records.

Sugarcreek Township police said the only records they have on Betts are from a 2015 traffic citation. They noted without further explanation that Ohio law allows sealed juvenile court records to be expunged after five years or when the person involved turns 23.

Bellbrook police say they weren't aware of any history of violence.

GOP Gov. Mike DeWine said it's clear Betts exhibited anti-social behaviors in high school that should have alerted those around him to a problem. But Betts had no apparent criminal record as an adult, and police said there was nothing that would have prevented him from buying a gun.

DeWine on Tuesday called on the Republican-led Legislature to pass laws requiring background checks for nearly all gun sales, allowing courts to restrict firearms access for people perceived as threats, and improving access to in-patient psychiatric care for those who need it most.

"If we, after a tragedy, only confine ourselves to doing those things that would have prevented this tragedy, we are missing a real opportunity," DeWine said. "So we need to look at these tragedies together."

President Donald Trump, who is expected to visit Dayton on Wednesday, has said he wants Washington to "come together" on legislation providing "strong background checks" for gun users, but he gave no details.

The Democrat-led House has passed a gun control bill that includes fixes to the nation's firearm background check system, but it has languished in the Republican-controlled Senate.

The El Paso and Dayton killings have contributed to 2019 being an especially deadly year for mass killings in the U.S.

A database by The Associated Press, USA Today and Northeastern University shows that there have been 23 mass killings so far this year, claiming the lives of 131 people. By comparison, 140 people died in mass killings in all of 2018. The database tracks every mass killing in the country dating back to 2006.