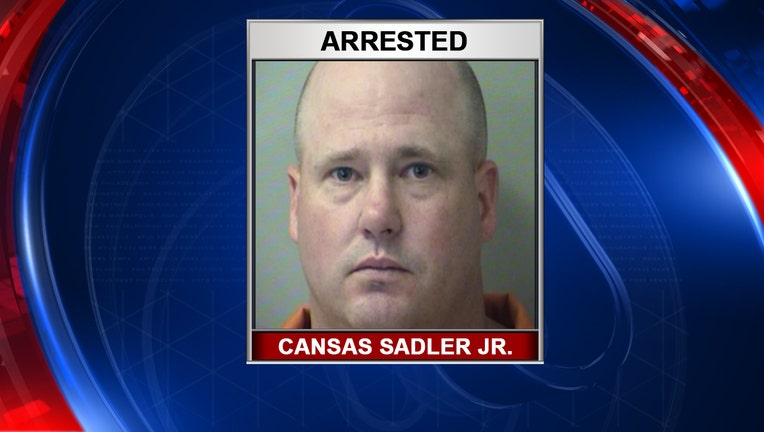 WINTER HAVEN, Fla. - A Florida deputy has been fired and arrested after investigators learned he tried to lure a Polk County child for sex, officials announced Wednesday.

The Okaloosa County Sheriff’s Office said one of their own, 41-year-old Cansas Sadler, Jr., came in contact with the 9-year-old girl through an online game called, “The Wolf,” reports The Northwest Florida Daily News. Sadler allegedly pretended to be an 11-year-old named, “Jade.” The child lives in Winter Haven, Polk County Sheriff Grady Judd said.

Detectives with the Polk County Sheriff’s office began investigating on June 11 when the victim’s mother learned of the interactions between an unknown adult man and her child, according to a news release.

Investigators said Sadler used his “Jade” persona to ask the child if she wanted to have sex with a 31-year-old man named “Jason." The online conversations moved to texts over the phone, said Sheriff Judd. "Then, he introduces her to nasty terms about photographs and then he also wants our 9-year-old to take pictures of herself and send to him," Sheriff Judd said, which she eventually does.

Sheriff Judd said the suspect called the 9-year-old but the little girl's mother answered the phone and had "an absolute total meltdown" and told him she was calling the cops.

Polk County detectives said they traced Sadler’s IP address to a computer in his Okaloosa County home. Investigators with the Okaloosa County Sheriff’s Office joined in the effort to determine the computer was used by Sadler to communicate with the child, officials said.

Sadler was arrested Wednesday on charges from both Polk and Okaloosa counties, which include soliciting a child and using a communication device to commit a felony. He also faces charges of transmitting harmful material to a minor after allegedly sending an image of his genitals to the child, reports The Northwest Florida Daily News.

Sadler has been with the sheriff’s office since July 2018 after retiring from the U.S. Army, where he was an Army Ranger and an Army Ranger trainer. "That's a sad commentary to what started out as a remarkable life," said Sheriff Judd. "But I can tell you, you don't arrive at the age of 41-years-old and do this for the first time," he said.

Sadler has two daughters himself, Sheriff Judd said, and was grooming this little girl over the phone.

“I’m always disheartened when someone sworn to serve and protect commits any crime, much less crimes of this nature,” said Sheriff Larry Ashley in a statement. “It’s an affront to all the hard-working, dedicated law enforcement officers who work tirelessly each day to keep our citizens safe. I want to thank our investigators and their counterparts from the Polk County Sheriff’s Office. As Okaloosa County Sheriff, I greatly appreciate their teamwork and professionalism in working to develop the evidence, arrest, and hold the suspect accountable.”

Sheriff Judd said his message to parents is simple: "If you're going to allow your 9-year-old to have a phone that connects to the internet, that connects to gaming apps, you've got to know what they're doing," he said. "These worthless deviants are online looking for your children."