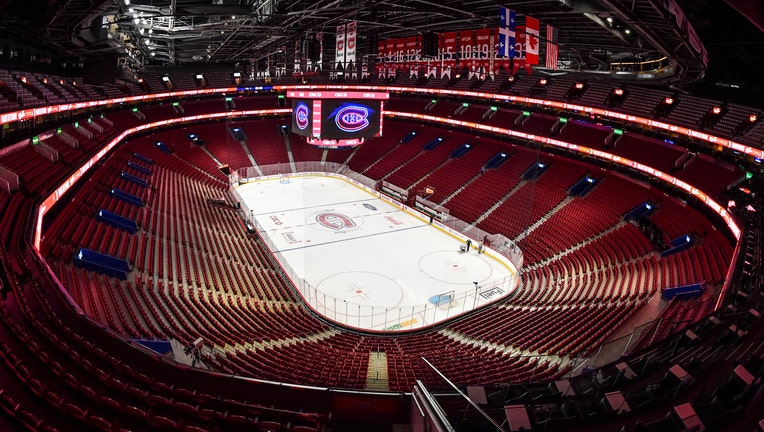 MONTREAL - The Montreal Canadiens and Philadelphia Flyers played in an empty Bell Centre on Thursday night because of a spiraling rise of COVID-19 cases.

The Canadiens announced about two hours before puck drop that Quebec public health officials had requested that no fans attend the game.

The team says in a statement it accepted the request "in order to help ensure the safety and security of our fans and fellow citizens."

The Canadiens said there will be an update on the status of Saturday night’s game against the Boston Bruins, who currently have a six players in COVID-19 protocol, including captain Patrice Bergeron and star winger Brad Marchand.

Montreal says it has been assured it will be allowed to return to partial capacity at the Bell Centre beginning in January.

With the number of coronavirus cases and game postponements rising across the league, the addition of Blidh, Frederic and Swayman gave the Bruins six players in the protocol. One team staff member also was placed on the list Thursday.

Bergeron, Marchand and fellow forward Craig Smith went on the protocol list earlier this week. Bergeron entered Wednesday, one day after Marchand and Smith. All six players could be out until late December.

Dr. E. John Wherry, from UPenn's Institute of Immunology, discusses the recent spike in COVID-19 cases across Pennsylvania and how it's impacting holiday gatherings and school plans as we head into the new year.

Hard-hit Calgary added two more players and another member of the team’s support staff to its COVID-19 protocol list. Shut down by the worst coronavirus outbreak in the NHL this season, the Flames have had four games postponed through Saturday, and it’s likely more will be scratched.

The Nashville Predators announced Thursday that assistant coach Dan Hinote had been added to the protocol list, and the Edmonton Oilers said forward Devin Shore had joined center Ryan McLeod and coach Dave Tippett in protocol.

More than 140 NHL players have been on the protocol list this season in a league that has proudly noted that all but one of its approximately 700 players are considered fully vaccinated, even if booster shots are not mandated.

It is a discouraging trend for the league, which plans to allow its players to participate in the Winter Olympics in China in February unless COVID-19 disruptions prove to be too much.