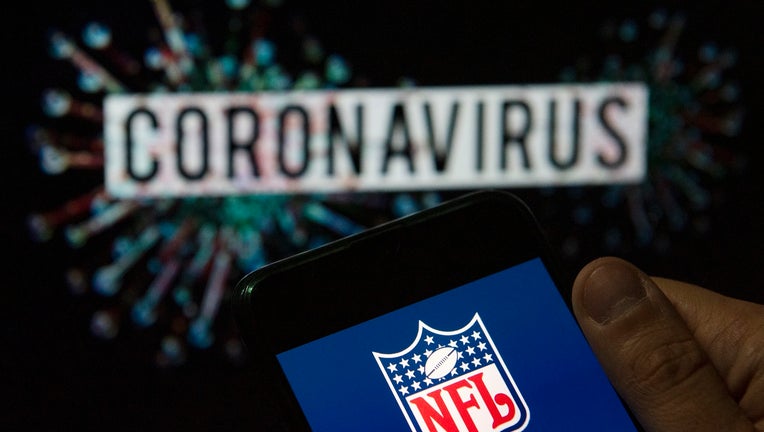 CHINA - 2020/03/24: In this photo illustration the American football league The National Football League (NFL) logo seen displayed on a smartphone with a computer model of the COVID-19 coronavirus on the background. (Photo Illustration by Budrul Chuk

A COVID-19 outbreak forced Washington to practice without 18 players Wednesday, with the possibility the list would continue growing.

The Eagles (6-7) host Washington (6-7) on Sunday as both teams battle for a wild-card spot in the jumbled NFC. The matchup between two resurgent teams has been overshadowed by player availability.

The Eagles have to spend extra time preparing for backups and others Washington may have to use.

"Obviously, we know if a guy is not vaccinated, then he’s got to wait longer than another guy," Eagles coach Nick Sirianni said. "You just don’t know when a guy is going to get back, so we’re going to prepare. ... it just puts you in a little more (difficult) situation."

Washington is one of several teams around the league dealing with a rising number of players on the COVID list. Starters such as cornerback Kendall Fuller and defensive tackle Jon Allen are among those on it. If they can’t play, that compounds what already was an injury-depleted roster and the team could end up being without nearly half of its Week 1 starters.

"We were in meetings and one of the guys told me that somebody else had it. ... It’s like, ‘Oh, here’s another one.’ And then: ‘There’s another one,’" said right guard Brandon Scherff, who noted he took some practice reps at center, a position he has never played at any level. "We knew that it was a possibility for us. With COVID, you know how fast it can spread."

The Eagles are coming off a bye that followed a victory over the New York Jets led by Minshew, who filled in because Hurts has an ankle injury. Minshew and Hurts were expected to split reps this week.

"It’s been a day-by-day thing," Hurts said. "I’m doing everything in my power to make myself available for the team."

Washington quarterback Taylor Heinicke left last week’s loss to Dallas with knee and elbow issues, but sounded optimistic about being ready to face Philadelphia. Rivera said it looked as if Heinicke was "pressing" against the Cowboys — and the QB agreed. He went just 11 for 25 for 122 yards and a TD pass, along with a fumble and an interception.

"Everyone took a turn — whether it was me making a poor decision or there was a missed block or a holding, a wrong route or a dropped ball — we all just took our turn and we couldn’t get the ball rolling," Heinicke said. "It’s tough to beat a good team like that when you’re beating yourself."

Washington won four straight before losing to Dallas, thanks to a solid defense — allowing just 17.5 points per game during that stretch — and an offense reliant on a stout running game led by second-year back Antonio Gibson. The second half of the formula fell apart against Dallas, though: Gibson gained 89.5 yards on the ground per outing during the previous four games but dropped to 36 yards on just 10 carries last week.

"The more we can rely on the run game," Scherff said, "the easier it gets for everybody."

Part of the issue: Gibson fumbled against Dallas, his sixth this season, and didn’t get another touch the rest of the way. His performance could be key against the Eagles, because when Gibson succeeds, it lessens the focus on Heinicke.

"Most times, when guys are going to the ground, they’re really bracing for the impact of hitting the ground, as opposed to protecting the ball. And it kind of looks a little bit like that," Rivera said, "because a lot of his problems do seem to come when he is headed down. And so we’ll just continue to work it."

COMMITTED TO THE RUN

The Eagles are the first team to rush for at least 175 yards in six straight games since the Chicago Bears did it in seven consecutive games in 1985. Since turning to the run, the Eagles are 4-2. Miles Sanders, Jordan Howard, Kenneth Gainwell, Boston Scott have each contributed and Hurts is the team’s leading rusher.