WASHINGTON (AP) - The last time Merrick Garland was nominated by the White House for a job, Republicans wouldn't even meet with him.

Now, the once-snubbed Supreme Court pick will finally come before the Senate, this time as President Joe Biden's choice for attorney general. Garland, an appeals court judge, is widely expected to sail through his confirmation process, which begins Monday before the Democratic-controlled Senate Judiciary Committee, with bipartisan support.

"Judge Garland’s extensive legal experience makes him well-suited to lead the Department of Justice, and I appreciated his commitment to keep politics out of the Justice Department," Sen. John Cornyn, R-Texas, said in a statement. "Unless I hear something new, I expect to support his nomination before the full Senate."

Biden’s choice of Garland reflects the president’s goal of restoring the department’s reputation as an independent body. During his four years as president, Donald Trump had insisted that the attorney general must be loyal to him personally, a position that battered the department’s reputation. Garland's high court nomination by President Barack Obama in 2016 died because the Republican-controlled Senate refused to hold a hearing.

Garland will inherit a Justice Department that endured a tumultuous time under Trump — rife with political drama and controversial decisions — and abundant criticism from Democrats over what they saw as the politicizing of the nation’s top law enforcement agencies.

The department’s priorities and messaging are expected to shift drastically in the Biden administration, with a focus more on civil rights issue, criminal justice overhauls and policing policies in the wake of nationwide protests over the death of Black Americans at the hands of law enforcement.

Garland plans to tell senators the department must ensure laws are "fairly and faithfully enforced" and the rights of all Americans are protected, while reaffirming an adherence to policies to protect its political independence, with the attorney general acting as a lawyer for the American people, not for the president. The Justice Department on late Saturday released a copy of Garland’s opening statement.

Garland will also confront some immediate challenges, including the criminal tax investigation into Biden’s son, Hunter, and calls from some Democrats to investigate Trump, especially after thousands of pro-Trump rioters stormed the U.S. Capitol on Jan. 6 as Congress was meeting to certify Biden’s electoral win. Garland, in his prepared remarks for the Senate committee, calls the insurrection a "heinous attack that sought to distrust a cornerstone of our democracy: the peaceful transfer of power to a newly elected government." 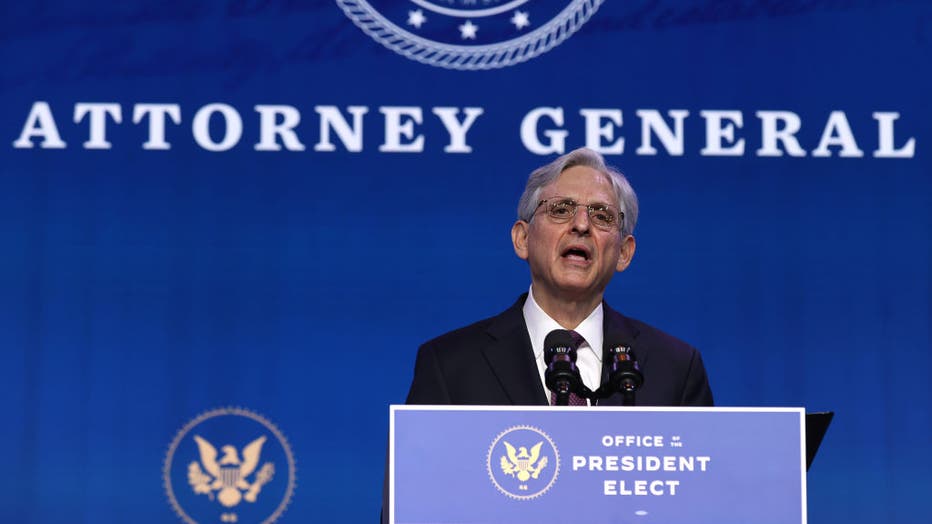 Federal Judge Merrick Garland, who serves as a judge of the U.S. Court of Appeals for the District of Columbia Circuit, was nominated to the Supreme Court by President Barack Obama in 2016 but Senate Republicans refused him a hearing or confirmation

A special counsel’s inquiry started by William Barr, while he was attorney general, into the origins of the Trump-Russia investigation also remains open. It will be up to Garland to decide what to make public from that report,

Garland was at the center of a political firestorm five years ago as part of a Republican gamble that eventually shaped the future of the Supreme Court. As Obama’s nominee to replace the late Justice Antonin Scalia, who had died unexpectedly in February of 2016, Garland was a moderate choice and generally well liked by senators.

But Majority Leader Mitch McConnell said hours after Scalia’s death that he would not consider any Obama nominee — and that the voters should decide by picking a new president that November. McConnell's entire caucus went along. Many declined even to meet with Garland, even though some privately questioned the gambit.

It was a huge political risk. Democratic presidential nominee Hillary Clinton was ahead in most polls and could have easily nominated someone more liberal than Garland had she won the White House. But she did not, Trump did and Republicans were elated as they voted to confirm Neil Gorsuch as a justice a year later. The bet later paid off unexpected returns as the Senate remained in Republican hands for the next four years and Trump had the opportunity to nominate two additional conservative justices, Brett Kavanaugh and Amy Coney Barrett, reshaping the political balance of the court.

Before the high court drama, Garland had been repeatedly praised by some Republicans as exactly the sort of moderate nominee they could support.

The criticism, such as it was, came from liberals, who had hoped Obama would pick someone more progressive, or diverse, than Garland. Vermont Sen. Bernie Sanders, then seeking the 2016 nomination against Clinton, said he wouldn’t have chosen Garland. Liberal activist groups were tepid in their support.

Sen. Lindsay Graham, R-S.C., was one of a handful of senators who met with Garland, but didn't budge from his position that a president should not choose a Supreme Court nominee in an election year. Graham reversed course when his party had the chance, ramming through Coney Barrett's nomination in record time during a global pandemic with just weeks to go before the 2020 election, which his party then lost.

Graham said in a tweet that Garland would be a "sound choice" to lead the Justice Department. "He is a man of great character, integrity, and tremendous competency in the law."

Garland is a white man, but two other members of the Justice Department leadership, Vanita Gupta and Kristen Clarke, are women with significant experience in civil rights. Their selections appeared designed to blunt any concerns about Biden's choice for attorney general and served as a signal that progressive causes would be prioritized in the new administration.

Garland is an experienced judge who held senior positions at the Justice Department decades ago, including as a supervisor in the prosecution of the 1995 Oklahoma City bombing. But he is set to return to a department that is radically different from the one he left. His experience prosecuting domestic terrorism cases could prove exceptionally handy now.

Garland probably will face pressure from civil rights groups to end the federal death penalty after an unprecedented run of capital punishment during the Trump administration. Thirteen federal executions were carried out in six months, and they became superspreaders during the coronavirus pandemic.

There could be questions, too, about the department's handling of a federal criminal and civil rights investigation examining whether members of New York Gov. Andrew Cuomo's administration intentionally manipulated data about nursing home coronavirus deaths.

The new chairman of the Senate committee handling the nomination, Sen. Dick Durbin, D-Ill., said Garland was well deserving of the post.

"And in light of his past treatment of the United States Senate, his day before the microphones is long overdue," Durbin said.