The Ever Given, a Panamanian skyscraper-sized vessel, turned sideways on Tuesday, becoming wedged in the Suez Canal. (Credit: Suez Canal Authority via Storyful)

CHICAGO - As efforts to refloat the shipping container blocking the Suez Canal continue, one TV host and former traffic reporter narrated the backup on social media.

Jon Hansen, a Chicago native and host of "The Jam," uploaded a video describing the traffic backup in the busy canal.

"The former traffic reporter in me couldn’t resist giving you a Suez Canal traffic update...," Hansen wrote in his video’s description.

Hansen can be heard saying in a traffic reporter voice, "Suez gulf lookin’ pretty heavy. Nowhere, going anywhere. This extends all the way out to the Red Sea."

The video showed ship icons on the Great Bitter Lake and near the location where the container ship Ever Given remained aground.

"Now your alternate Madagascar. You can go left or right — both lanes are open," Hansen continued. "Now, this will take you 10 days. It’ll certainly save you the five or six."

Before joining "The Jam," Hansen spent years as a traffic and news reporter on numerous Chicago radio and TV Stations, according to the company’s website.

His video is one of many social media posts providing commentary on the incident, as attempts to refloat the ship continued into the night of March 25.

Images captured by the Pléiades satellite constellation on March 25 showed the ship stationary near the Suez Canal. 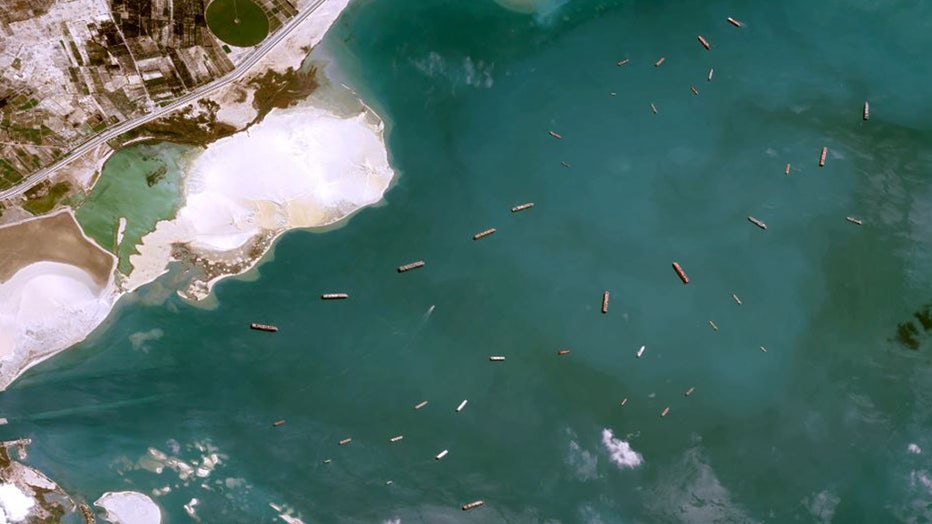 In a statement, the Suez Canal Authority said they aimed to remove 15,000 to 20,000 cubic meters of sand from around the bow of the ship.

The owner of the ship said they aim to dislodge the ship by Saturday, according to Nikkei Asia.