Despite the potential legal consequences for such an act, the video triggered others to pull similar stunts and post video online.

LOS ANGELES - A girl seen licking a tub of ice cream and putting it back on a grocery store shelf in a now-viral video seems to have inspired some copycats on social media.

The video, which was posted June 29 and has garnered more than 12 million views, shows a girl opening a half-gallon container of Blue Bell's “Tin Roof” flavor and licking it. The girl then re-seals the ice cream and returns it to the store freezer before walking away, laughing.

On Wednesday, authorities said the video was recorded at a Walmart store in Lufkin, Texas. Blue Bell said in a statement that it had recovered the suspected carton that was tampered with — and removed all Tin Roof half gallons from that location “out of an abundance of caution.”

Investigators said they identified the alleged “Blue Bell licker” as a juvenile from San Antonio, tied to the Lufkin area through her boyfriend’s family. Police said in a statement that both were forthcoming with what happened and admitted to the act.

As an adult, a second-degree charge of tampering with a consumer product could lead to up to 20 years in prison and $10,000 in fines, according to the Texas state penal code.

Authorities were still discussing if her boyfriend, who is an adult, will face charges in the case. 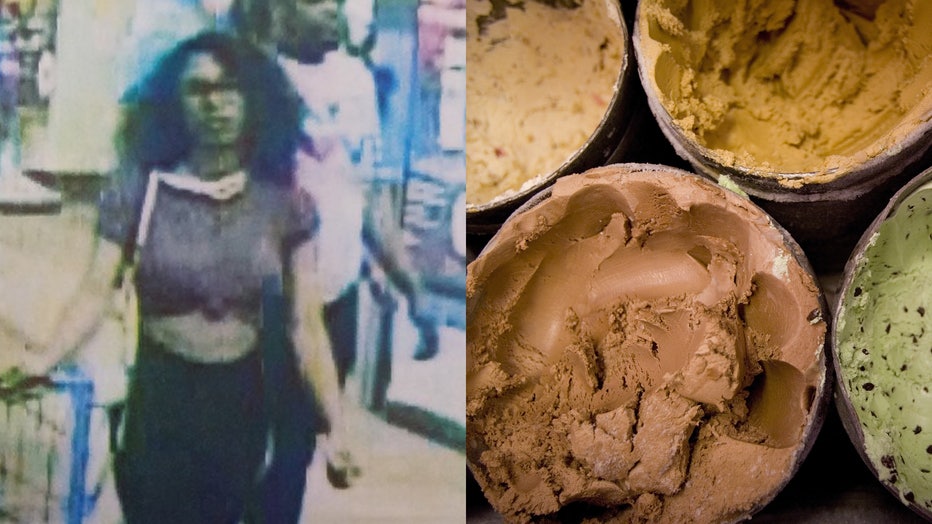 A female matching the description of the suspect in a viral video is seen on surveillance at a Walmart store in Lufkin, Texas, alongside a file image showing tubs of ice cream. (Photo credit: Lufkin Police Dept. & David Paul Morris/Getty Images)

Despite the potential legal consequences for such an act, the video triggered others to pull similar stunts and post video online.

Twitter user @GAYSHAWNMENDES posted a video of himself this week at what appears to be a CVS with the caption, “I love ice cream.” The video shows him scooping ice cream out of a container with his bare hands before putting the carton back in the freezer and quickly walking away.

Hours later, he posted a video showing a police officer speaking to him, followed by another tweet which read, “Just left the police station. Too much clout to care.”

Another video surfaced of a different woman licking ice cream at a store. The Instagram user, @shelley_golden, later said she bought the ice cream she licked, claiming “the whole thing was staged.”

And it’s not just ice cream. Another Twitter video appears to show a person swishing mouth wash at a store and then spitting it back into the bottle. The video, which had received more than 14.5 million views, was posted by Twitter user @bameronkaii.

People on social media were understandably disgusted and let their feelings be heard.

“Everyone that does this needs to be prosecuted for endangering the public with their komodo dragon spit,” another person wrote on Facebook.