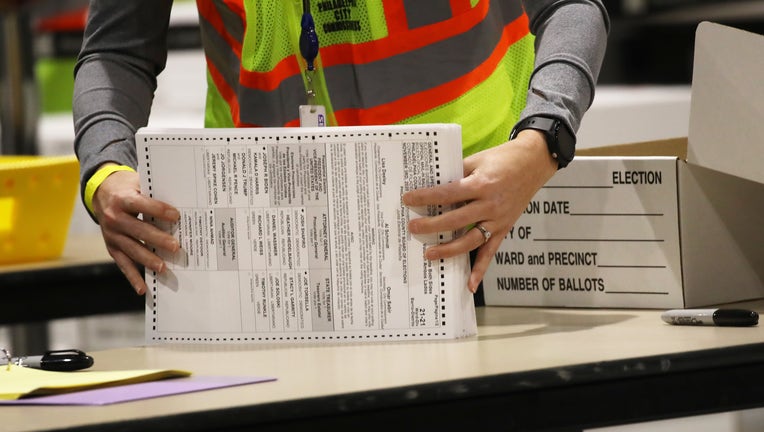 PHILADELPHIA, PENNSYLVANIA - NOVEMBER 04: Election workers count ballots on November 04, 2020 in Philadelphia, Pennsylvania. With no winner declared in the presidential election last night, all eyes are on the outcome in a few remaining swing states

HARRISBURG - Republicans in Pennsylvania’s state Senate are preparing to test how far they can go in pursuing what the GOP calls a "forensic investigation" of last year’s presidential election, as they help perpetuate baseless claims that Democrats cheated former President Donald Trump out of victory.

Wednesday's scheduled meeting of the Republican-controlled Senate Intergovernmental Operations Committee is expected to include a vote on subpoenas for detailed information on who voted in last year's presidential election, including their driver's license number and the last four digits of their Social Security number.

Republicans also want to know by what method each person voted, whether in-person or by mail, absentee or provisional ballot, as well as information on when each registered voter last cast a ballot.

Republicans insist the undertaking has nothing to do with Trump or trying to overturn last year's presidential election.

The goal is to determine whether "there are any anomalies, and if so, by what method of voting those issues were most prevalent," Jason Thompson, a Senate Republican spokesperson said. "Since the investigation is focused on improving our voting laws, that could help determine where any potential problems lie."

Biden announces vaccine mandate for employers with more than 100 workers

In his most forceful pandemic actions and words, President Joe Biden on Thursday announced sweeping new federal vaccine requirements affecting as many as 100 million Americans in an all-out effort to increase COVID-19 vaccinations and curb the surging delta variant.

All those data points — except for maybe Social Security numbers — are in the state's voter registration system or available by link with the state Department of Transportation, said a spokesperson for Wolf's Department of State, which oversees how counties administer elections in Pennsylvania.

Democrats have vowed to fight any subpoenas, possibly in court, and it’s not clear whether Wolf’s administration can be forced to produce information, even by court order.

The official rules of Pennsylvania’s Senate grants its committees broad authority to issue subpoenas to "any public agency" in the state, but it is a rarely used mechanism.

Last year, Wolf's administration — in an ongoing clash with Republican lawmakers over his handling of the pandemic — refused to comply with a subpoena, saying the state’s highest court "has recognized that a governor — and agents and officials acting under his authority — are exempt from subpoenas relating to the exercise of such authority."

The idea of a "forensic investigation" or "audit" has been propelled by Trump's most ardent supporters in battleground states where he lost. It has sown discord in the Senate Republican caucus and drawn criticism from establishment Republicans that Pennsylvania is following in the footsteps of Arizona.

There, a widely discredited and partisan election "audit" began in January with subpoenas that critics call a fruitless search for fraud to legitimize Trump’s baseless conspiracy theories that the election was rigged against him. It is still dragging on.

The taxpayer-funded undertaking in Pennsylvania could cost millions of dollars if big auditing firms are hired, and Republicans have yet to answer major questions about how it will work, who will work on it and where.

Democrats have sharply criticized it, saying the Republicans’ "sham audit" or "fraudit" is a stunt to erode the legitimacy of President Joe Biden’s victory and an extension of a national campaign to attack voting rights. Biden beat Trump in Pennsylvania by more than 80,000 votes, according to certified results.

Republicans have repeatedly distorted the actions of judges and state officials leading up to last year’s election, perpetuating the false idea that Democrats cheated.