Gov. Evers addressed the media Thursday afternoon from Kenosha for the first time since the unrest in the city following the officer-involved shooting of Jacob Blake.

KENOSHA, Wis. - Efforts to repair and rebuild are underway in Kenosha two days after several businesses and apartment buildings were badly damaged or destroyed during riots that followed the police shooting of Jacob Blake on Sunday, Aug. 23.

It's not just about physically rebuilding burned down walls or replacing smashed windows. Much of the work that took place on Thursday focused on emotional healing.

Artists continued to paint more murals on boarded-up windows and doors, spreading messages of love, hope and unity in an almost festival-like atmosphere throughout downtown and uptown Kenosha. Musicians played songs, and a group of moms from different churches around the city formed a prayer circle for anyone to join.

Kenosha residents and visitors alike crowded the sidewalks to take in the experience -- a complete turnaround from the events of Monday and Tuesday. 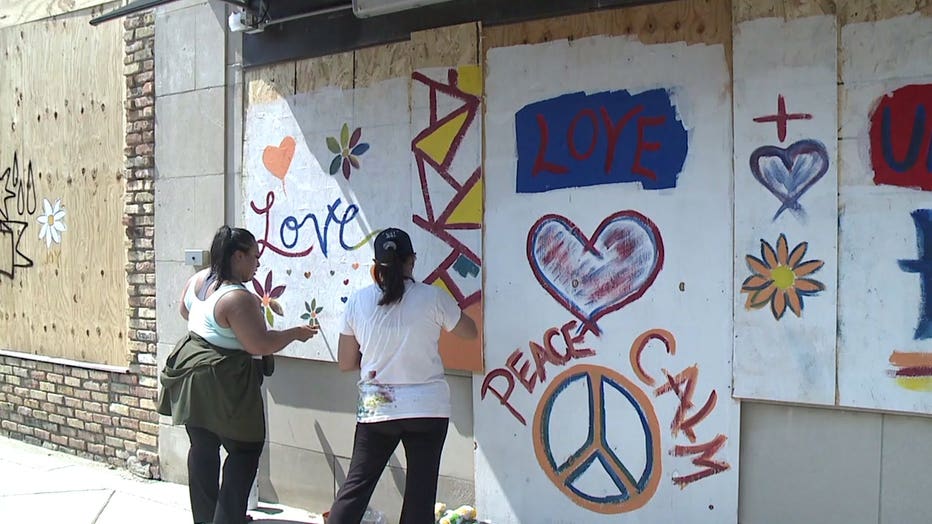 "The one good thing is our community all rose up, we all came out," said Kenosha resident Shelley Miller. "We cleaned up, we boarded up and now we're painting the town with love and we'll rise up."

A number of GoFundMe pages and other online fundraisers have been created to help the businesses that suffered extensive damage during the riots or for people who lost their homes. Those efforts have raised tens of thousands of dollars and counting.

For the first time since the shooting and unrest that followed, Gov. Tony Evers set foot in Kenosha on Thursday.

"It's so important to have freedom of speech," said Gov. Evers. "When you have people running around with long guns, some of them want to be policemen...it's a threat to marginalize that freedom of speech that we value so much.

Lt. Gov. Mandela Barnes joined the governor on Thursday. The same day, Kyle Rittenhouse -- a 17-year-old from Antioch, Illinois -- was charged in the fatal shooting of two people earlier in the week.

"To be able to shoot somebody and walk away from the scene," Lt. Gov. Banes said. "We've got a much bigger problem on our hands."

Rittenhouse faces six charges in Kenosha County, including three homicide-related charges. He has a "Status of Extradition” hearing Friday at 9 a.m. in Lake County, Illinois, online court records show. He would face a mandatory life sentence if convicted of first-degree intentional homicide, the most serious crime in Wisconsin.