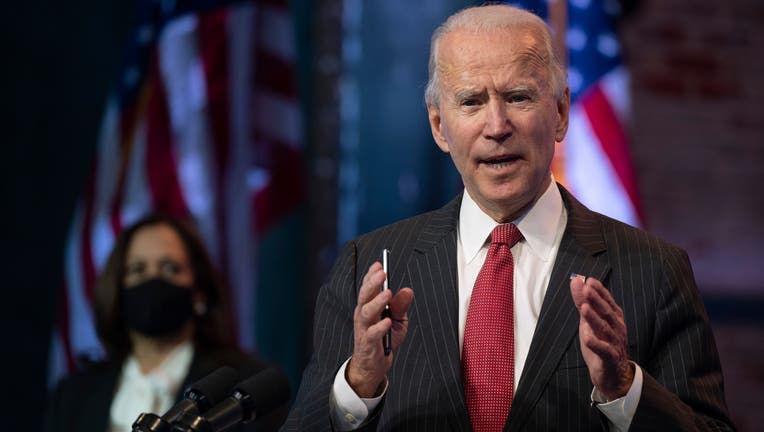 US President-elect Joe Biden speaks after a meeting with governors in Wilmington, Delaware, on November 19, 2020. - Biden said today he would not order a nationwide shutdown to fight the Covid-19 pandemic despite a surge in cases. (Photo by JIM WATSO

The federal General Services Administration on Monday officially recognized Joe Biden as the president-elect, clearing the way for him to begin a formal presidential transition and handover of power.

An official said Murphy made the determination after Trump efforts to subvert the vote failed across battleground states, most recently in Michigan, which certified Biden's victory Monday, according to the Associated Press.

President Donald Trump, who has refused to concede his loss, tweeted about the transition Monday, saying, “I want to thank Emily Murphy at GSA for her steadfast dedication and loyalty to our Country. She has been harassed, threatened, and abused – and I do not want to see this happen to her, her family, or employees of GSA. Our case STRONGLY continues, we will keep up the good... fight, and I believe we will prevail! Nevertheless, in the best interest of our Country, I am recommending that Emily and her team do what needs to be done with regard to initial protocols, and have told my team to do the same.”

The Biden-Harris transition also sent out a statement.

Murphy’s decision green lights the entire federal government’s moves toward preparing for a handover of power at the White House.

The agency had stalled in recognizing Biden as the president-elect, amid President Donald Trump’s refusal to concede defeat in the 2020 race. Trump instead has pursued legal challenges in several key states, alleging widespread voter fraud without evidence, and has stymied the transition process.

Murphy had faced mounting pressure from both sides of the political aisle to clear the way for Biden’s transition to formally begin.

GSA announced Monday that the Biden transition can begin.

More than 160 business leaders asked GSA chief Emily Murphy to immediately acknowledge Biden as president-elect and begin the transition to a new administration. "Withholding resources and vital information from an incoming administration puts the public and economic health and security of America at risk,'' the business letters said in an open letter to Murphy.

The statement called on “Republican leaders — especially those in Congress — to publicly demand that President Trump cease his anti-democratic assault on the integrity of the presidential election.”

Experts say the effort to litigate the results of the 2020 election by Trump faced long odds given the Electoral College tally and recent court rulings dismissed several of the lawsuits. State election officials have said that the 2020 election largely went smoothly and there were no major irregularities.

The delay in the GSA officially recognizing Biden as the president-elect meant his team was blocked for weeks from having access to their counterparts at the various federal agencies or tapping funds and office space for the transition.

This included Biden receiving official intelligence briefings traditionally afforded to incoming presidents on national security matters, as well as his ability to collaborate with the current coronavirus pandemic response team.

The stakes of a smooth transition are especially high this year because Biden will take office amid the worst pandemic in more than a century, which will likely require a full government response to contain.

Murphy is a Trump appointee, but the GSA’s ascertainment decision is supposed to be apolitical. The White House did not say whether there have been conversations on the matter between officials there and at GSA.

Since being named the projected winner on Nov. 7, Biden has moved forward with plans to fill out his government despite the road blocks.