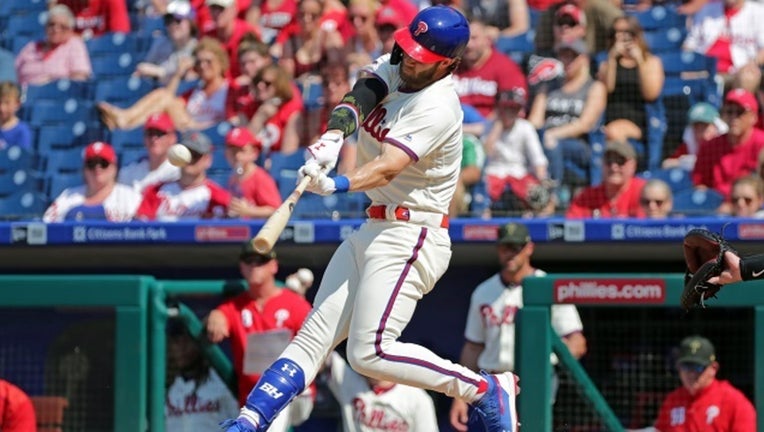 Bryce Harper homered for the second straight day and pinch-hitter J.T. Realmuto also went deep to help the Philadelphia Phillies complete a three-game sweep of the Colorado Rockies with a 7-5 victory Sunday.

Harper's tiebreaking, two-run shot in the sixth inning wasn't as prodigious as his 466-foot drive in Saturday's 2-1 victory, but this 404-footer had plenty of distance to clear the right-center wall for the NL East leaders.

The $330 million slugger also had an RBI groundout in the second.

Ryan McMahon hit two homers, and Charlie Blackmon and Trevor Story also went deep for the Rockies on a picturesque, 85-degree day with the wind blowing out to center. Colorado, which dropped 9½ games behind the first-place Dodgers in the NL West, has lost four straight.

Realmuto tied it at 5 in the sixth with his first career pinch-hit homer, a two-run shot to left off Bryan Shaw (2-1). Rockies manager Bud Black lifted Shaw for Mike Dunn with one on and two outs to face Harper, who launched a 3-1 slider into Philadelphia's bullpen. That set off a wild celebration from the crowd of 38,603 - many of them kids wearing an arm sleeve giveaway similar to Harper's.

Edgar Garcia (1-0) got one out in the sixth for his first major league win. Pat Neshek pitched a scoreless ninth for his third save.

Rockies starter Kyle Freeland continued to struggle. Freeland finished fourth in NL Cy Young Award voting last season while setting a club record for the lowest ERA (2.85) by a lefty starter. But he exited after just 1 2/3 innings Sunday, giving up three runs and four hits. Freeland has an 8.03 ERA in his last five starts while allowing 28 hits - nine homers - over 24 2/3 innings with 14 walks.

Phillies starter Jerad Eickhoff was tagged for three home runs. He has served up five long balls in his last two games after not giving up a homer over 31 innings to start the season.

Despite Freeland's troubles, Colorado led 5-3 after McMahon went deep for the second time when he drove Jose Alvarez's 80 mph curve into the seats in right. In the fourth, McMahon cleared the wall in left. He has two career two-homer games - both against the Phillies this season.

Blackmon opened the game with his 33rd leadoff homer, tying Paul Molitor for 12th on the career list.

Phillies: Activated INF-OF Scott Kingery (strained right hamstring) from the injured list and sent OF Nick Williams to Triple-A Lehigh Valley. Kingery, starting in center field for the first time in his career, went 1 for 3.