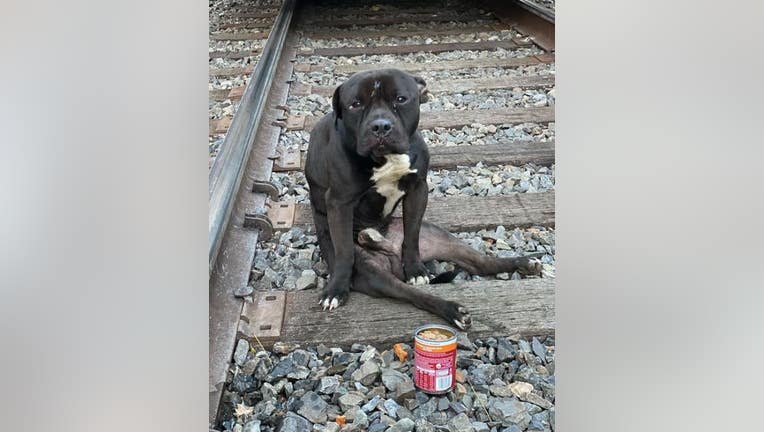 Philly Rescue Angels is asking for donations for a dog named Lucky, who was left paralyzed after being left on train tracks. Orthopedic surgeons believe the dog was run over by a train.  (@phillyrescueangels/Instagram)

PHILADELPHIA - Philly Rescue Angels is making a public cry for help after a dog, who was found on SEPTA train tracks, was left paralyzed. According to the nonprofit organization, lucky was left on train tracks in Philadelphia and for several days.

The dog lost his ability to use its back legs and Philly Rescue Angels called for donations to help with the pup's recovery.

After being examined, veterinarians determined lucky is suffering from a severe spinal chord injury and doctors believed he was hit by a train.

Lucky is set to have surgery on Friday morning, but Philly Rescue Angels says the surgery will only help eliminate his pain. They also say the spinal chord fracture is just one of his injuries.

"He has broken teeth and some deep scrapes that need to be addressed," the organization said.

With an estimated total of $15,000 for the surgery and $1,000 per night to stay at the ICU, Philly Rescue Angels is asking for donations to help cover the expenses for Lucky's care.

The organization is also sending a message about adoption after receiving an influx of messages about adopting him.

"We have received many messages of people wanting to adopt or foster Lucky, but we would like to make everyone aware that Lucky will need extensive after care," Philly Rescue Angels said on Instagram.

According to the nonprofit, Lucky will need help relieving his bowels due to nerve damage in his colon and bladder. Additionally, he will need to be carried or get wheels for mobility.