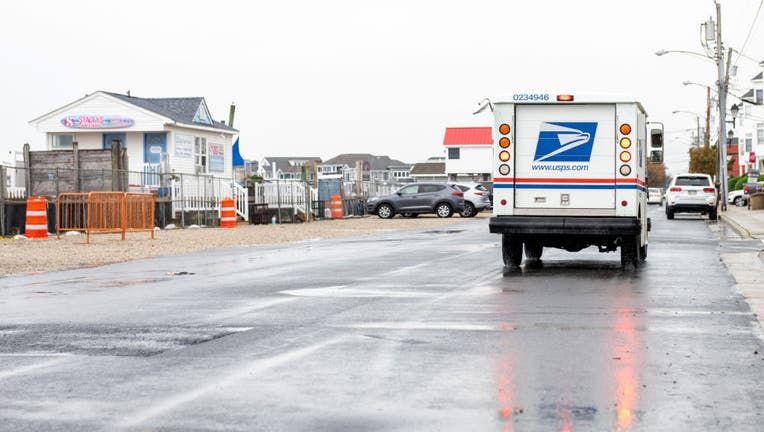 A USPS mail truck is seen on an empty road in the rain as the state of New Jersey continues Stage 2 of re-opening following restrictions imposed to slow the spread of coronavirus on August 13, 2020 in Ventnor City, New Jersey. (Photo by Alexi Rosenfe

WASHINGTON - House Democrats are calling in Postmaster General Louis DeJoy to testify on Capitol Hill this month amid outcry over disruptions in the U.S. Postal Service many warn could impact the 2020 election.

Senate Democrats, led by Minority Leader Chuck Schumer, are also calling on the Republican majority to compel DeJoy and other top Postal Service officials to testify.

"Alarmingly, the Postmaster General – a Trump mega-donor – has acted as an accomplice in the President’s campaign to cheat in the election, as he launches sweeping new operational changes that degrade delivery standards and delay the mail," Pelosi's office said in a statement. "The Postal Service itself has warned that voters – even if they send in their ballots by state deadlines – may be disenfranchised in 46 states and in Washington, D.C. by continued delays."

RELATED: Protesters rally outside Postmaster General's home with "wake-up call" for him to resign

Pelosi's announcement comes a day after protesters banged pots and pans outside DeJoy's D.C. home as part of a "wake-up call" for him to resign.

President Trump named DeJoy, who has contributed more than $1.2 million to Trump's re-election effort, as Postmaster General in May.

Widespread delays have followed, with postal service employees saying their overtime has been cut and that necessary equipment has been removed from the workplace. Viral videos on social media show mailboxes being removed from streets without explanation.

RELATED: USPS warns 46 states, DC about election mail delays that could affect whether ballots get counted

The postal service this week warned 46 states and the District of Columbia that service delays could prevent millions of mail-in ballots from being counted in the November election.

President Trump, who requested his mail-in ballot for Florida's primary election Tuesday, has long derided mail-in voting. He has repeatedly said without evidence that mail-in voting is ripe for fraud, and this week said that he wants to hold up to $25 billion in USPS funding while acknowledging its impact on mail-in voting.

More people than usual are expected to mail in their ballots this year due to the coronavirus pandemic.