PHILADELPHIA - The start of a new era couldn't have gone much better for the Philadelphia Eagles.

Or much worse for the Atlanta Falcons.

Jalen Hurts threw three touchdown passes, the first of them to Heisman Trophy winner DeVonta Smith, and the Eagles made a winner of Nick Sirianni in his head coaching debut with a 32-6 rout of the hapless Falcons on Sunday.

Now firmly entrenched as the Eagles starter after Carson Wentz was traded, Hurts certainly looked the part with touchdown passes of 18 yards to Smith, 9 yards to Dallas Goedert and 23 yards to Jalen Reagor.

"We wanted to come out in Week 1 and start off the right way," said Hurts, who guided the Eagles to more points than they scored in any game a year ago. "It feels good."

Another Philadelphia rookie, fifth-round pick Kenneth Gainwell, scored his first TD as a pro with an 8-yard run late in the third quarter to essentially seal the victory.

The Falcons looked downright inept in their first game under coach Arthur Smith.

After settling for field goals on two impressive drives to start the game, Atlanta didn't do much of anything the rest of the way. The Falcons never advanced farther than the Philadelphia 49 and finished with just 260 yards.

In a matchup of the NFC's two worst teams from 2020, the Eagles looked to have made far more improvement with a revamped offense led by Hurts and a healthy line in front of him.

He completed 27 of 35 passes for 264 yards and used his mobility to repeatedly neutralize Atlanta's attempts to shake him up with a wide variety of blitzes. He rushed for 62 yards on seven carries and was sacked only once.

"Jalen was in complete control the whole game," Sirianni said. "I’m very happy with the way he played."

The first TD of the Sirianni Era signaled the changing times in Philadelphia after the Eagles slumped to a 4-11-1 last season, leading to the firing of Super Bowl-winning coach Doug Pederson.

Hurts lofted a pass to DeVonta Smith, the No. 10 pick in the draft, along the left side of the end zone to give the Eagles a lead they never relinquished just past the midway point of the first quarter. 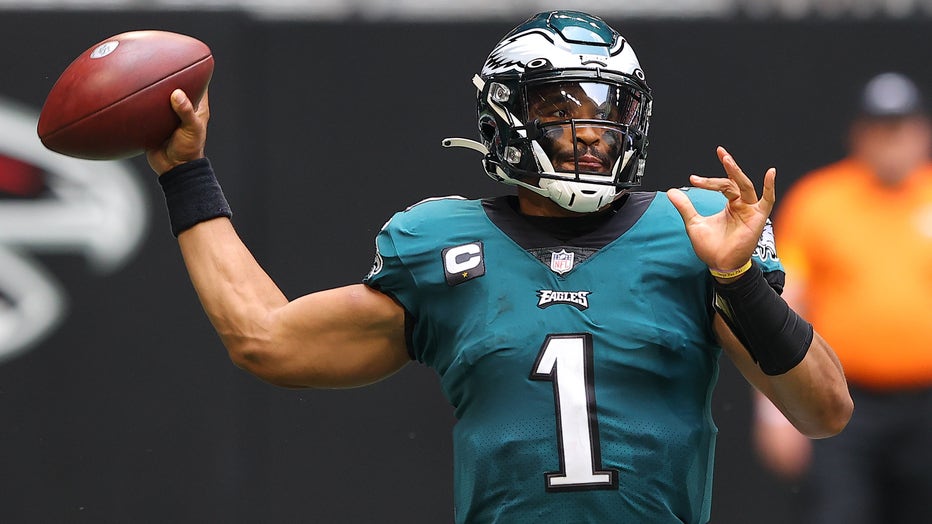 ATLANTA, GEORGIA - SEPTEMBER 12: Jalen Hurts #1 of the Philadelphia Eagles throws a pass during the second half against the Atlanta Falcons at Mercedes-Benz Stadium on September 12, 2021 in Atlanta, Georgia. (Photo by Kevin C. Cox/Getty Images)

Smith took advantage of a nifty, borderline pick from tight end Zach Ertz to get just enough separation on cornerback Fabian Moreau to haul in the throw from Hurts. In an interesting twist, it was same end zone at Mercedes-Benz Stadium where Smith caught a championship-winning touchdown pass for Alabama in overtime in the 2018 national title game.

"We saw the coverage we wanted, rolled with it and executed the play," DeVonta Smith said.

Hurts and Smith were teammates for two years with the Crimson Tide. The Eagles hope this is the first of many touchdowns they'll team up for in the NFL.

When asked about scoring on the first catch of his NFL career, Smith said, "It really hasn't hit me yet." He finished with six receptions for a team-leading 71 yards.

The Falcons were coming off a 4-12 season in which they fired both their coach and general manager, and an offseason that featured the trade of seven-time Pro Bowl receiver Julio Jones.

On opening day, at least, they looked even worse.

"We didn't put any stress on them," their new coach said.

The Eagles were much more imposing up front after using 14 different offensive line combinations last season.

Right guard Brandon Brooks and right tackle Lane Johnson, a pair of three-time Pro Bowlers, were back from injuries. Jordan Mailata, a former Australian rugby star, lived up to a lucrative new contract he signed a day earlier after beating out 2019 first-round pick Andre Dillard for the left tackle spot.

Javon Hargrave had two of Philadelphia's sacks, both on fourth-down plays in the closing minutes when the Falcons were forced to go for it on consecutive possessions.

"I'm really confident that everybody in our room can get to the quarterback," Hargrave said.

Tight end Kyle Pitts is expected to be a big part of the offense after the Falcons drafted him with the fourth overall choice.

He didn't show much in his NFL debut.

Targeted eight times, the rookie from Florida finished with four catches for 31 yards.

"I thought he did some good things for us for the first time," Ryan said. "We were kind of choppy in the passing game. I think that makes it difficult on guys."

Eagles: S Marcus Epps left in the first half with a concussion. ... Ertz was sidelined with a hamstring injury. ... WR J.J. Arcega-Whiteside sustained an ankle injury.

Eagles: Host the San Francisco 49ers in their home opener next Sunday.

Falcons: Travel to Florida to take on the defending Super Bowl champion Tampa Bay Buccaneers next Sunday in an NFC South matchup.