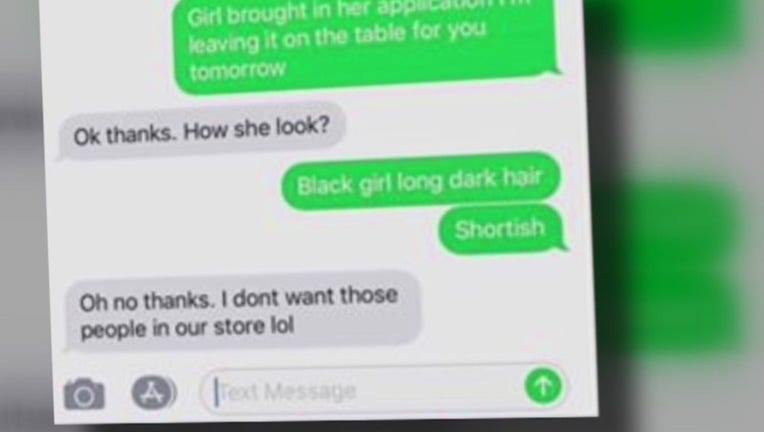 In just a day, a text written by a Subway manager about high school student Katelyn Simmons has taken social media by storm.

"Most of the people who took it and ran with it first are members of this community who know our family and what this community stands for," said Katelyn's mother Timika Simmons.

Katelyn's friend, who worked at the Subway at 15830 Champion Forest, was so angry over the manager's text that he quit.

When the manager asked that employee in a text, "How she look?" He replied, "Black girl long dark hair shortish."

The manager responded: "Oh no thanks I don't want those people in our store lol."

"I was appalled and disturbed," Katelyn Simmons said. "It's the 21st Century and there's still people so bold and open about it like that."

In a response, Subway said, "the manager of this location was immediately terminated for her actions. The franchise owner has reached out to the young woman who applied for the position to apologize and encourage her to consider re-applying."

But Tamika Simmons says that didn't happen, and the franchise owner voiced her concerns of violence due to the fired manager's text.

"She just assumed again because we were African American that there was going to be some type of violent response to that," she said.

"There was no apology, there was no, 'We support you guys, we want you to consider being on our team.' There was none of that," the teenager said.

In the statement Subway also said," the former managers actions do not reflect the openness and values shown by Subway franchise owners. The Subway brand is inclusive and welcomes all individuals to be part of the Subway restaurant teams."