The wildly popular chicken sandwich is making its return to restaurants, the company said.

MIAMI - Months after the popular chicken sandwich sparked a frenzy at chain restaurants and on social media, Popeyes announced the official return date of its sold-out menu item to restaurants nationwide.

In a press release on Monday, the company shared just two words: “I’m back.”

In August, the simple sandwich was added to the menu and within two weeks it was sold out. People waited hours in line to get a taste of the sandwich, which features a buttermilk-battered and hand-breaded chicken filet on a toasted brioche bun, topped with pickles and either mayo or spicy Cajun spread. 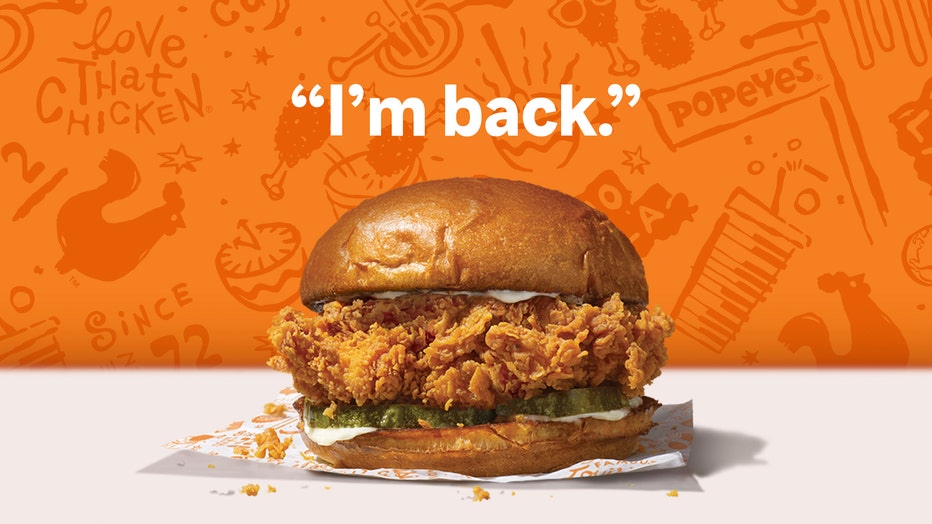 The sold-out sandwich, which sells for $3.99, is making its return to restaurants on Sunday, November 3. (Photo credit: Popeyes)

It also sparked a fierce debate on Twitter between Popeyes and Chick-fil-A over who boasts the best chicken sandwich.

In a promotional video about the return date of its sandwich, Popeyes seemed to further draw out the feud with Chick-fil-A by noting that the restaurant is, in fact, open on Sundays.

And for those who can’t wait until November to get their hands on the mouth-watering menu item, you can now also dress as one for Halloween.