‘It was a touching sight’: Restaurant server uses lunch break to sit and talk with WWII veteran

A heartwarming moment has gone viral on social media after a customer at a restaurant in Pennsylvania captured a server going out of his way to sit down with a 91-year-old WWII veteran sitting alone in a nearby booth.

BELLE VERNON, Penn. - A heartwarming moment has gone viral on social media after a customer at a restaurant in Pennsylvania captured a server going out of his way to sit down with a 91-year-old WWII veteran sitting alone in a nearby booth.

Lisa Meilander was having dinner with her family at Eat ’n Park diner in Belle Vernon when she noticed an elderly man eating alone in a booth directly across from her.

The first thing she said she noticed was when her server, Dylan, dropped to one knee to look the man in the eye and take his order.

Meilander wrote that the man apologized for not hearing too well and that he had forgotten to put in his hearing aids, which prompted the server Dylan to drop to his knee to take the order.

What amazed Meilander, though, was the bond that quickly formed between the two.

“He talked about how he lost his hearing during his time in the war. He was 91 years old with many stories to tell. Dylan patiently listened giving him his full attention,” she wrote on her Facebook post.

Meilander wrote that the veteran proceeded to apologize for talking too much saying that he is alone and “doesn’t have someone to talk to.”

She added that Dylan simply smiled and said he enjoyed listening before he took the man’s order. 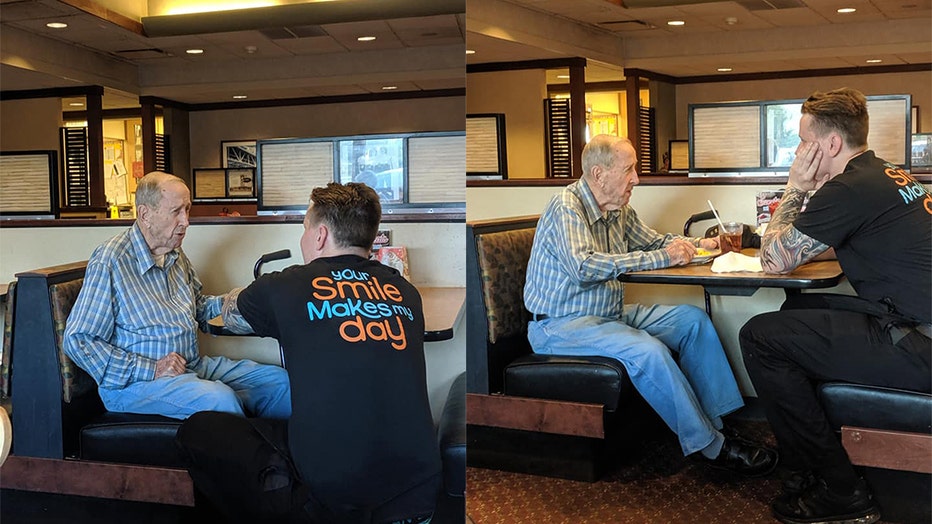 Lisa Meilander was having dinner with her family when she noticed her server Dylan used his lunch break to spend time and talk with a WWII veteran customer. (Photo by Lisa Meilander)

Meilander went on to write that when Dylan brought the man his food, he said he was on his lunch break and asked if he could join the the man as he ate and continue the conversation.

She said she wanted to pay for the man’s meal but before she could flag Dylan down, a man seated nearby asked if Dylan could bring him the check in which Dylan said “someone’s already taken care of it.”

“As we left the restaurant the two of them were conversing and many people seated nearby were smiling. It was a touching sight,” Meilander said.