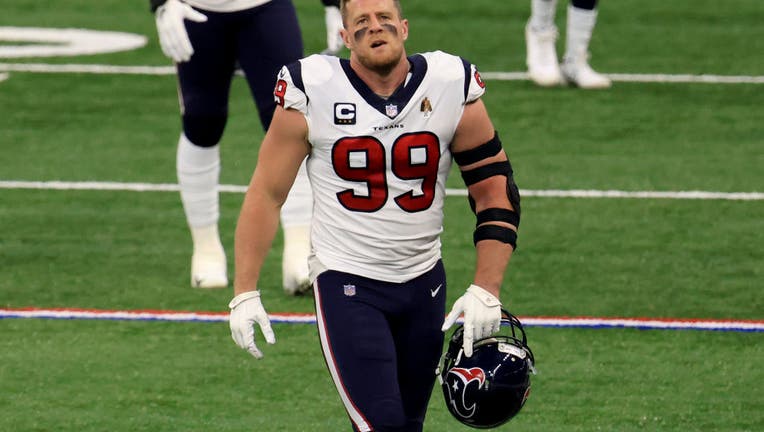 INDIANAPOLIS, INDIANA - DECEMBER 20: J.J. Watt #99 of the Houston Texans walks to the sideline in the game against the Indianapolis Colts at Lucas Oil Stadium on December 20, 2020 in Indianapolis, Indiana. (Photo by Justin Casterline/Getty Images)

HOUSTON - The Houston Texans and defensive end JJ Watt announced that they have "mutually agreed to part ways."

Watt made the announcement in a video message posted to Twitter on Friday morning.

"I have sat down with the McNair family and I have asked them for my release and we have mutually agreed to part ways at this time," Watt said.

The Texans confirmed the mutual parting.

"Change is never easy, especially when it involves the ones you love. J.J.’s impact on not only our organization, but the entire Houston community, is unlike any player in our franchise’s history," Texans Chair and CEO Cal McNair said in a news release. "I told J.J. earlier this week that we will forever consider him a Texan. We take solace in knowing that this is not a goodbye but a ‘see you soon.’ For now, we will build upon the foundation that J.J. created here and forge ahead with our unwavering mission to bring a championship to our city, create memorable experiences for our fans and do great things for Houston."

Watt said he wanted to make the announcement in a video so fans could hear it from him directly.

"I’m excited and looking forward to a new opportunity and I’ve been working extremely hard, but at the same time it is always tough to move on," Watt said in the video message. "I just want you guys to know, I love you, I appreciate you. I appreciate the McNair family for drafting me and giving me my first opportunity in the NFL. Thank you, Houston. I love you."

Watt appeared in 128 games across 10 seasons for the Texans. The Texans selected Watt with the 11th pick in the first round of the 2011 NFL Draft.

"Simply put, there has been no person in the past decade who has made a greater impact on the Texans organization than J.J. Watt," Co-Founder and Senior Chair Janice S. McNair said in a news release. "J.J.’s dominance on the field was unprecedented and resulted in countless moments that will go down in Texans history. To me, what best represents J.J.’s connection to Houston is his tradition of playing catch with the fans before every home game. The number of people who wear #99 jerseys with smiles on their faces totally encapsulated J.J.’s passion for bonding with Texans fans at every possible opportunity. His commitment to the community is unlike any player in NFL history. We are forever grateful to J.J. and his family."

Watt has won three AP NFL Defensive Player of the Year Awards, but he has also been recognized for his contributions to Houston off of the field.

In the wake of Hurricane Harvey, Watt launched an online relief fundraiser with a goal of $200,000, and donations quickly surpassed that number – reaching more than $41 million. Watt partnered with local organizations to distribute the aid.

His response to the disaster helped him earn the prestigious Walter Payton NFL Man of the Year Award.

Watt's contributions to the city don't end there. Houston Mayor Sylvester Turner says he talked to Watt two weeks ago. He says Watt reached out and is helping the city on rebuilding some parks.

"He asked me to send him a list of parks and underserved areas in the city and what they needed and he wanted to assist financially to help upgrade those parks," Mayor Turner said. "He reached out to me and we talked. I sent him a list. This is consistent with who he is and what he’s done."

Mayor Turner said the impact of Watt’s departure is "almost without words."

"His commitment to the city is evident from (Hurricane) Harvey and not just with raising money," Mayor Turner said. "Pickup up the phone and calling kid with cancer, encouraging them. This is what he does and who he is. His departure from the Texans, it’s almost without words to describe the impact, not just as it relates to the team but as it related to the city."