Military performs flyover in Philadelphia for Fourth of July

The "Salute to the Great Cities of the American Revolution" featured military flyovers in Boston, New York City, Philadelphia and Baltimore. While the flights will likely be visible from a number of locations in the cities, they are taking place as Americans deal with surging cases of COVID-19 and mixed messages on the need for masks and social distancing.

Trump has been criticized for pushing to go ahead with large rallies and other public gatherings, like the upcoming holiday event, despite the increased risks of infection.

The flyovers started in Boston at about 4 p.m., with Air Force and Marine Corps jets flying over in five waves. The show was be kicked off by the Air Force Thunderbirds, followed by B-1, B-2 and B-52 bombers, F-15 and F-22 fighter jets and U.S. Marine Corps F-35 fighters.

In Boston, they flew over the center of the city, approaching from the northeast and flying over the U.S.S. Constitution and Fenway Park.

They will then flew on to New York City, heading down the Hudson River at about 5 p.m., passing just east of the Statue of Liberty. The aircraft will got to Philadelphia shortly after 5:15 p.m., flying over Independence Hall and the Liberty Bell, then headed to Baltimore, where they reached Fort McHenry around 5:30 p.m., and then continued south toward Washington, D.C. The jets flew at about 1,000 feet. 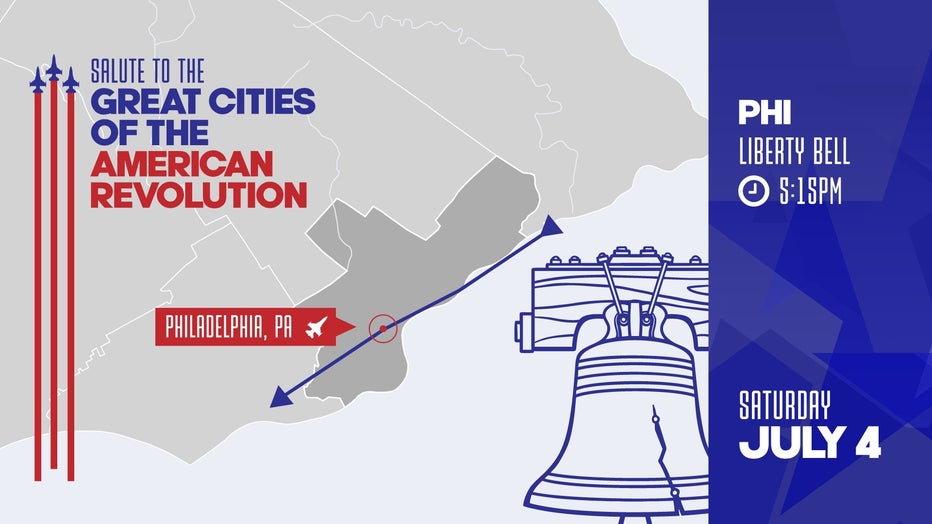 They will be joining a larger air show in the nation's capital, which will begin at about 6:30 p.m. with a demonstration by the U.S. Army Golden Knights Parachute Team and a 21-gun salute by the military's 3rd Infantry Regiment, known as The Old Guard.

The air show will follow at 7 p.m., and will begin with a flyover by Air Force One. The aerial show will include a wide range of military fighter jets, bombers, helicopters, cargo and tanker aircraft, And it will finish with the military's elite demonstration teams, the U.S. Navy Blue Angels and Air Force Thunderbirds.

The aircraft will approach the city from Arlington National Cemetery in northern Virginia and fly directly over the Ellipse.

According to the Pentagon, the shows will not cost taxpayers much because the aircraft crews are using the flyovers to meet routing training and proficiency requirements that would normally be conducted at other locations.