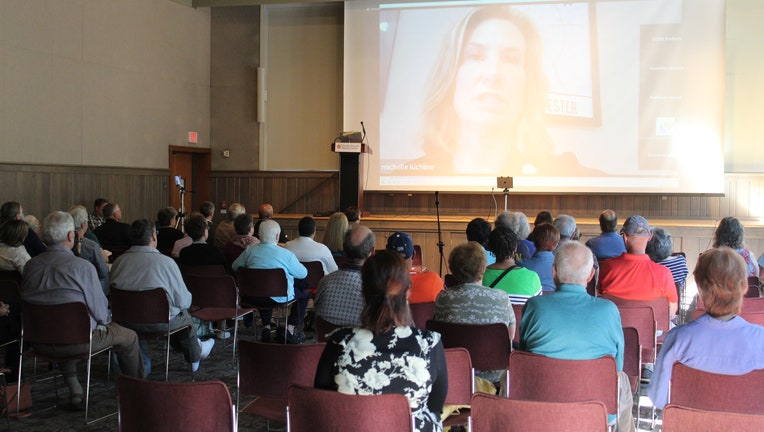 CHESTER COUNTY, Pa. - The Chester County Historical Society and Chester County Planning Commission hosted a walking tour and presentation to highlight how historical events in West Chester have contributed to Juneteenth, the commemoration of June 19, 1865, when the last of enslaved Africans were freed.

The Town Tour and Village Walks of Juneteenth Commemoration, part of a large initiative that has continued for 27 years, was planned by the county’s Heritage Preservation Coordinator. In total, seven tours will be hosted this year with the theme "Journeying Towards Freedom." The places highlighted will focus on the community’s relationship to Black citizens, businesspeople, the Civil War, and abolitionists.

Chester County Commissioner Marian Moskowitz says that there are months of planning that go into the event. Its significance comes together with the role that the county played in the underground railroad.

"We have a great, long, 300-year history of the historical nature of the anti-slavery movement," she said. "It’s important that people recognize that and celebrate that, especially this year."

Thursday’s announcement of Juneteenth becoming a federal holiday was celebrated by many on and off the tour. This recognition signifies a nationwide acknowledgement of independence for African-Americans, something that Moskowitz says she hopes will carry on.

"When we have family gatherings, we talk about our grandparents or what funny things they’ve done or history they’ve made. These stories also get passed down," she said, "Journeying towards freedom is the theme for this tour, and what everyone is focused on."

Similarly, Pennsylvania State Representative Dianne Herrin says she has long been an admirer of the work that has been done to continue the celebration of Juneteenth and that she attended the events to celebrate and learn about the function of the Chester County Historical Society.

"It is so integral to our understanding of our history. We have so many tremendous exhibits, and I really want people to know about the resources in our community so they can take advantage of it, too," she said.

On the walk, which hosted nearly 15 people but can host up to 20, more than 10 sites were highlighted relative to their places in history, many of which were little known by participants before the tour.

Sites included Marshall Square park, which predates central park by 10 years, according to Community Engagement Officer for Arts, Culture, and Historic Preservation at the Cultural Alliance of Chester County and tour guide Malcolm Johnstone, the tallest statue in West Chester dedicated to the deceased member of the Ninety Seventh Regiment Pennsylvania Volunteers; a 50-pound Civil War cannon; and Hotel Warner, where Bayard Rustin housed his first demonstration and sit-in at the coffee house that was next door.

Of the most notable sites in the tour was The Lincoln Room in the basement of The Lincoln Building, now a cafe. There, the first published biography of Abraham Lincoln was printed in 1860, created from several of Lincoln’s notes.

At the close of the Village Walk, attendee Vernet Spence-Brown says she appreciated the organizations responsible for the events made an effort to reach out to diverse groups rather than just White Quakers. They were mentioned and are known for their historical stance on abolition. She hopes that this will foresee a new era of education about Juneteenth.

"I hope people get to know what Juneteenth is and the importance of this day. The walk was interesting, learning about people that you know of and their relationship to these streets, and just how connected everything is," she said.

The celebration of this holiday can bring about many emotions, but Herrin says that she feels this event will make a great impact for Pennsylvanians.

"I hope people learn our true history of slavery, and in all its entirety," she said. "Because it is so critical for us to understand what happened in this country in terms of slavery so that we never let anything like that happen again. That may sound crazy for some people, but I really believe that’s the truth. If we don’t fully understand and acknowledge our history, we are bound to repeat it in one way, shape, or form."

This Juneteenth, an understanding of truth, pain, and accurate history was brought forward by county organizers who want to encourage education.

The Town Tours and Village Walks are scheduled from June 24-August 21. Attendees are welcomed in person or virtually. Visit https://chescoplanning.org/HisResources/TownTours.cfm for more information.