PHILADELPHIA,PA - As the fifth day of protests begin in Philadelphia, several stores and businesses in Kensington are trying to come together to clean up their area after looters rampaged through.

One group of men and women, some previously homeless or fighting addictions, have taken to the streets to clean up and stay out of trouble.

“They don’t participate in any of that stuff. We had some individuals who actually were homeless. Thirty-eight individuals who stayed in that night to make sure that they weren’t participating. Some of them are actually out here today cleaning up, and they cleaning up the streets because if we didn’t have them in, it could have been a lot worse,” said Mel Wells, one of the organizers.

All over Kensington, the group of workers cleaned whatever they could find. Every alleyway and corridor they could and while the people around them were looting, they went in to try to clean up behind them.

”We have some people who went in and tore up the stores but we went right behind them, cleaning up after them because it’s our job to make sure that we serve. Even with people fighting for justice, we keep our focus on the community and things that are happening in the community as well.”

For the former group of ex-criminals and homeless looking to make a difference, many of them were anxious to get out there, but to work to get the streets clean and clear again the next morning. 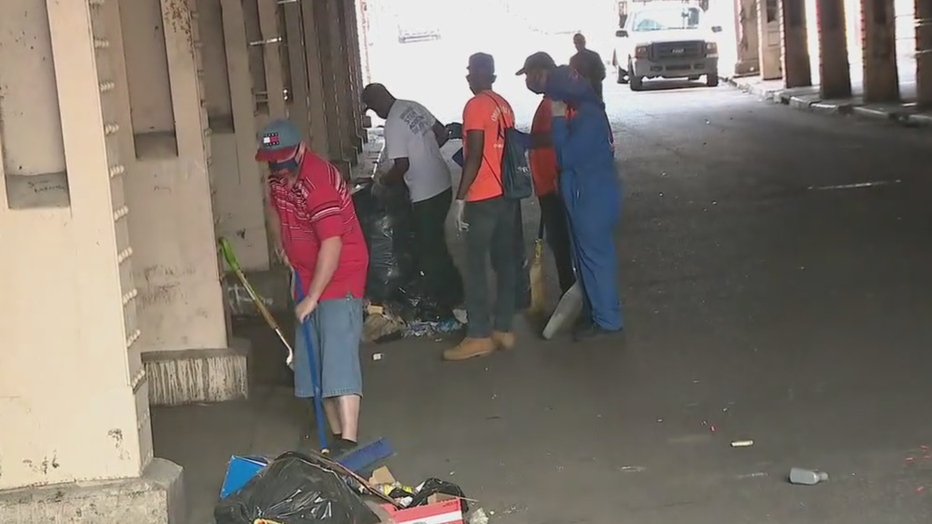 Wells says they are not only cleaning the streets, they’re showing the positives this community around them has.

“Now they’ve come to be a part of the positive. Everybody wants the negatives that were out there, everybody wasn’t doing negative stuff that was out there," Wells explained. "There were people protesting for the right things and we have a lot of those guys here with us today. It shows that we do have positivity going on in our community.”

The group does get their share of thanks for cleaning up the streets, but for Wells, the biggest thanks he likes to receive is the ones from his workers.

“They say thank you by picking up the broom and giving back to the community and that’s what the real thank you is," he added.