Johnson &amp; Johnson said one of six women who experience blood clots after receiving their COVID-19 vaccine is a local gym instructor.

PHILADELPHIA - A Pennsylvania woman is one of the six women who developed a rare blood clotting disorder after receiving the Johnson & Johnson coronavirus vaccine, the pharmaceutical company said Wednesday.

Testing later showed the woman had several clots in her brain, abdomen and lungs, according to Johnson & Johnson. She was treated at a New Jersey hospital and has since recovered. 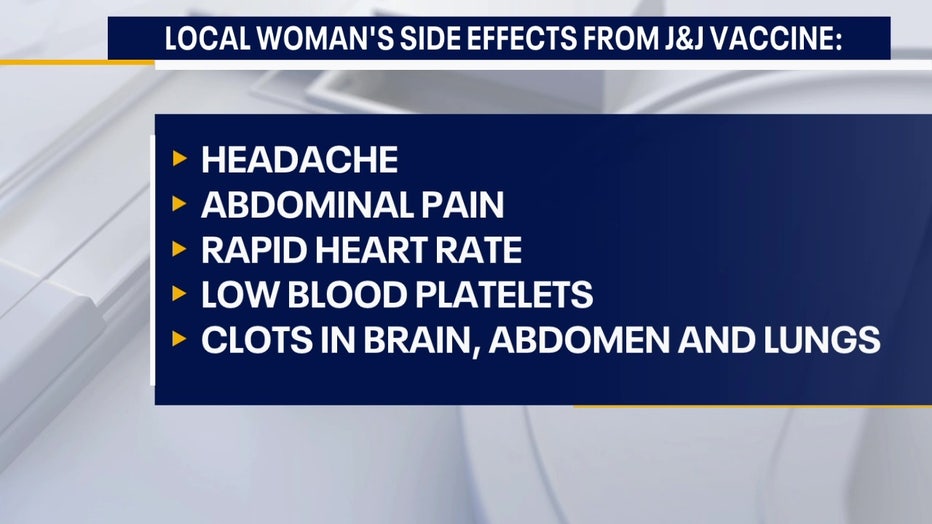 Johnson & Johnson says a local gym instructor is one of six women who experienced an adverse reaction after receiving their COVID-19 vaccine.

The Food and Drug Administration on Monday placed a recommended pause on the Johnson & Johnson vaccine after six women developed a rare clotting disorder that led to one woman's death.

These six cases all occurred in women ages 18-48, and from 6 to 13 days after vaccination. That’s about half as likely as getting struck by lightning in a year. A seventh case was included in an official review.

These are not run-of-the-mill blood clots. They occurred in unusual places, in veins that drain blood from the brain, and in people with abnormally low levels of clot-forming platelets. The six cases raised an alarm bell because that number is at least three times more than experts would have expected to see even of more typical brain-drainage clots, said CDC's Dr. Tom Shimabukuro.

"What we have here is a picture of clots forming in large vessels where we have low platelets," Shimabukuro explained. "This usually doesn’t happen," but it’s similar to European reports with the AstraZeneca vaccine.

The good news: The government says there are no signs of similar clots after vaccination with the Pfizer and Moderna shots that are the mainstay of the COVID-19 fight in the U.S.

The Associated Press contributed to this article