A local Ukrainian woman shared her story of escaping her war-torn homeland. Valentyna Levytsky said she was caring for her ill mother in Kyiv when the fighting erupted. She and her mother fled to Lviv where her mother passed away. Valentyna then went to Poland and has since reunited with her husband in Philadelphia.

PHILADELPHIA - A Philadelphia couple is reunited after the wife escaped war torn Ukraine where she was trapped while caring for her sick mother when Russia's army invaded over three weeks ago.

Sean Moir and Valentyna Levytsky traveled to Ukraine in January, 6 months after the couple was married at a summer ceremony in Kyiv. Valentyna stayed behind to take care of her mother, Nadiah, who was ill with late-stage Parkinson's disease.

Nadiah's condition got progressively worse just as Russia started its long-threatened invasion of Ukraine, Moir explained. Valentyna stayed with her mother through bomb blasts and small arms fire right outside her window.

"We'd be talking on Skype, and there'd be a noise, and I'd see her suddenly turn here heard, and 'I'd be like what was that?' It was a bomb dropping outside," Moir said.

The husband of a Ukrainian woman shared the story of his wife's harrowing escape from her war-torn homeland as Vladimir Putin's Russian army commenced a full-fledged invasion two weeks ago.

About a week into the war, Nadiah's conditions worsened and Valentyna decided that she had no choice but to get out.

"I couldn't get her to the hospital. I couldn't find medicine. There were huge lines at the pharmacy," Valentyna said.

The pair traveled to Lviv where Nadiah passed away a few days later.

"There were family members present, a priest, but no church service.  It was difficult to find men to dig the grave because they were all preparing to defend the country," Moir said. 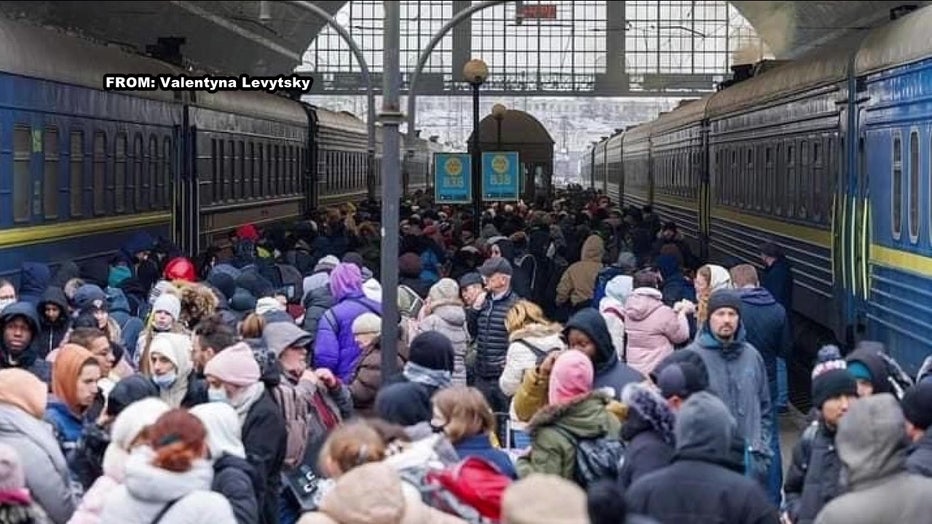 Valentyna then boarded a bus to Poland with so many other refugees fleeing their homeland. She said the trip took three times long as it should have.

"It took 18 hours because of border, huge lines at the border. Lots of refugees," Valentyna said. "I was in a bus filled with women and kids, some of them lost homes forever."

Valentyna made it stateside last week and reunited with Sean, but she is staying in contact with loved ones in Ukraine.

"A lot of my friends stayed in Kyiv, and so I'm also trying to contact them to make sure they're alive," Valentyna said.