FOX NEWS - A man dressed as the Batman villain The Joker, who livestreamed himself this week allegedly threatening to bomb and kill people along the Delmar Loop in suburban St. Louis, Mo., was charged Tuesday with making a terrorist threat, a felony, according to a published report Wednesday.

Prosecutors said Jeremy J. Garnier was first seen outfitted as The Joker – complete with makeup –  at around 8:15 p.m. at the Blueberry Hill bar and restaurant, where he was reported to have made threats, the St. Louis Post-Dispatch reported. 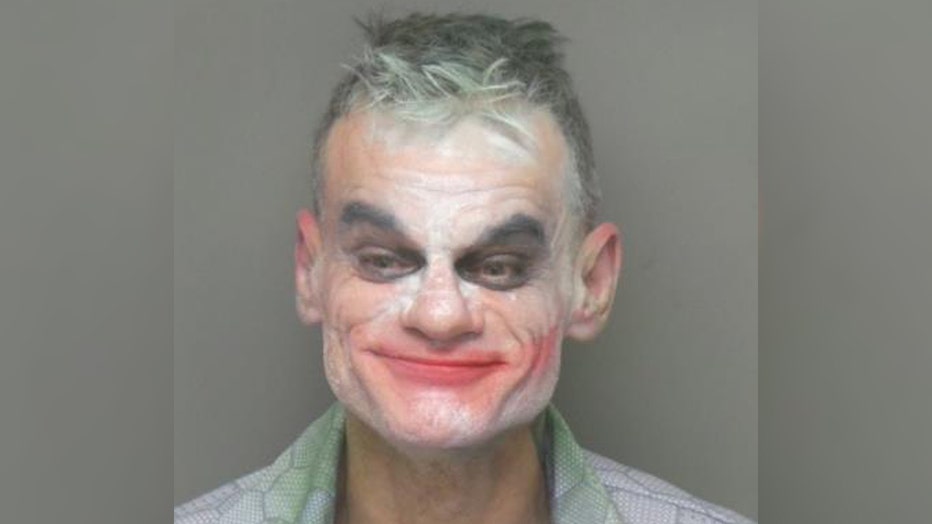 Jeremy J. Garnier dressed as the Batman villain The Joker, livestreamed himself this week and allegedly threatened to bomb and kill people along the Delmar Loop in suburban St. Louis, Missouri. (City of University City, Missouri Police)

Someone reported Garnier to police for making threats using his Facebook Live app. When police responded, they were told the incident involved an active shooter, the newspaper reported.

A nearly hourlong livestream posted to the Jeremy Joseph Garnier Facebook account shows a man dressed as The Joker speaking to the camera in a bedroom where he is putting on a costume. He's later seen driving in his car, smoking a pipe and going to the St. Louis Galleria, where he's stopped by security and asked to leave.

The video then shows him driving to the Delmar Loop, at times talking about ending the country's opioid epidemic.

"Yes, I'm doing this for attention, but the attention I seek is to take over the world," the man in the video says, according to the Post-Dispatch. "I'm going to start killing people until this reaches 1,000 [viewers], and once it reaches 1,000, I'm going to go out in public and I'm going to kill more. We're not going to go to any movie theaters. We're going to go totally unarmed because we don't want to alert the authorities into thinking we might be on an actual rampage."

Later in the video, the man is seen entering the Blueberry Hill restaurant. A host asks to see identification and when he says he doesn't have it, he tells another worker he's 48 years old and allowed in, the report said. He is then seen walking through Blueberry Hill, looking out the front windows and noticing a police car.

"I think they're looking for me, but it's OK," the man in the video says.

He's later seen telling someone, presumably a bartender, he wants a Sprite and doesn't drink alcohol.

"Yeah, I can't be inebriated when I'm planning on, you know, killing a bunch of people," he said. "It's not something you can do. I'm live on Facebook right now. I've got like nearly 2,000 people watching me."

He is then seen telling someone he's not armed and identifying himself to viewers as Jeremy Joseph Garnier, the newspaper said.

Several minutes later, the man can be seen being handcuffed in Blueberry Hill by a police officer, with the livestream still rolling, the Post-Dispatch reported.

A judge ordered Garnier held without bail. Court records did not list an attorney for him.

He has a criminal history that includes multiple convictions for burglary in St. Louis County.