The president said that the orders will completely restructure the prescription drug market.

WASHINGTON - President Donald Trump signed new executive orders on Friday that he said would significantly reduce the price of prescription drugs for American patients and seniors.

“This reduction is still not close to what I want, what I expect, and I’m looking for help for our great seniors especially, in particular,” the president said, noting that the action would have an incredible impact.

Trump said the four executive orders will lead to “massive reductions” in drug costs, promising that the orders “will completely restructure the prescription drug market, in terms of pricing and everything else, to make these medications affordable, accessible for all Americans.”

Trump said one of the orders will require community health centers to pass the giant discount they receive from drug companies on insulin and epipens directly to their patients, a move that would bring insulin prices down to just “pennies a day” from their previous levels.

Another executive order will allow states, wholesalers and pharmacies to safely and legally import prescription drugs from Canada and other countries, where, the president said, the price for an identical drug is “incredibly lower.” 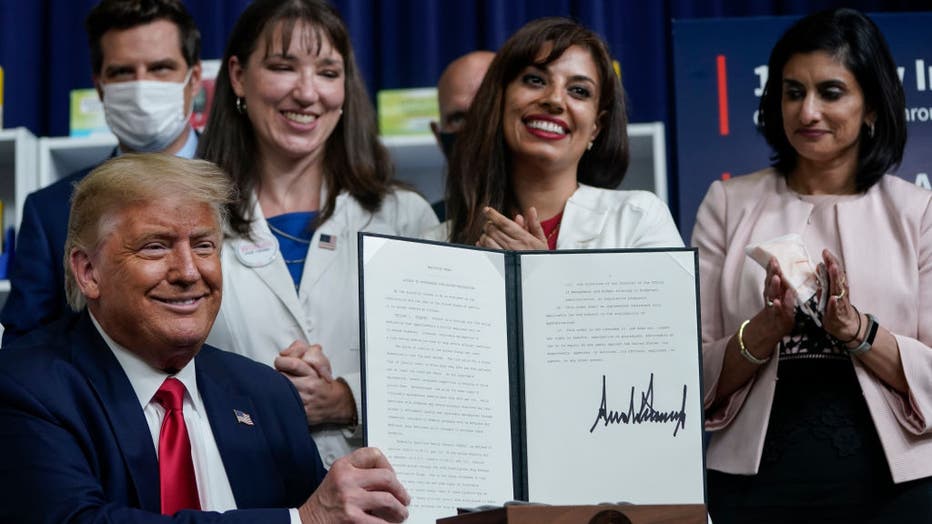 “The American people pay an average of over three times more for medicine than the Canadians,” Trump said. ”Many people go to Canada, I see it all the time, they go to Canada, buy drugs and then they come back, prescription drugs, because they save so much money.“

Trump said an additional order would prevent middlemen from making a profit off of prescription drugs, describing how the move will reduce those drugs’ prices.

”Frequently drug companies give these middlemen discounts of up to 50% on the price of prescription drugs, but too often those discounts are not passed onto the pharmacy counter, meaning the people,“ Trump said. ”This rule will pass those billions of billions of dollars a year, I mean many many billions,“ to patients, the president said, which would save Americans with high drug costs thousands of dollars a year.

Another order, “the granddaddy of them all,” Trump said, will end global freeloading on the backs of American patients and American seniors. Trump said U.S. patients for decades have paid the highest amounts for prescription drugs anywhere in the world.

Under this order, “Medicare will be required to purchase drugs at the same price as other countries pay,“ the president said.