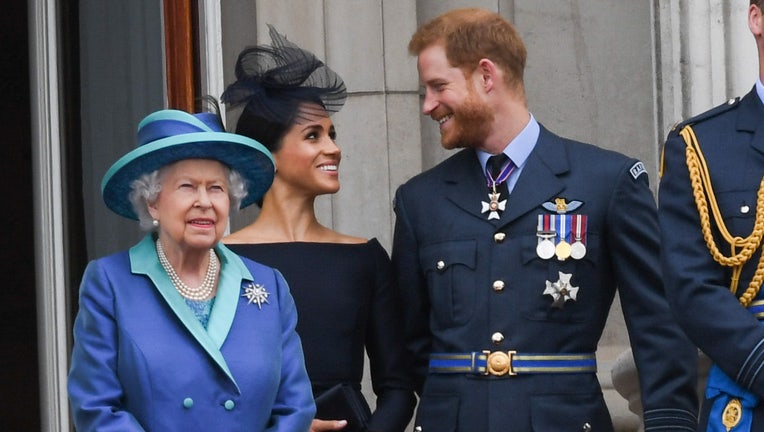 Queen Elizabeth ll, Meghan, Duchess of Sussex and Prince Harry, Duke of Sussex stand on the balcony of Buckingham Palace to view a flypast to mark the centenary of the Royal Air Force (RAF) on July 10, 2018 in London, England. (Photo by Anwar Hussein

Meghan Markle and her husband Prince Harry will need to drop their “Sussex Royal” label if they want to be truly financially independent.

It is believed Queen Elizabeth II and other senior officials have agreed it is no longer tenable for the Duke and Duchess of Sussex to keep the word “royal” in their branding, U.K.’s Daily Mail reported on Wednesday.

According to the outlet, the former American actress and the British prince have spent “thousands of pounds” on a new Sussex Royal website and have registered the label as a global trademark for a range of items, “including clothing, stationery, books and teaching materials.” The couple has also taken steps to set up their own charitable organization named Sussex Royal, The Foundation of the Duke and Duchess of Sussex.

However, the pair will reportedly need to “re-brand.”

“After weeks of talks, the queen and senior officials are believed to have told the couple the term ‘royal’ is inconsistent with their ‘branding,’ U.K.-based media correspondent Neil Sean told Fox News on Wednesday.

MEGHAN MARKLE, PRINCE HARRY MAY NO LONGER BE ABLE TO USE 'SUSSEX ROYAL' BRANDING: REPORTS

“This has not gone down well with the couple who truly thought they were fine with… re-branding themselves,” Sean continued. “Now the queen has other plans, too, which will make the ongoing push to be [independent] harder than they first thought.”

According to Sean, a palace source told him: “They have not banked on this move at all from the queen. What she has effectively done is close down any type of royal branding. This will create problems, particularly in the U.S. where the term ‘royal’ means so much in terms of branding.”

“Now the bigger problem lies in how they plan to market themselves,” the source also alleged. “Without the royal label attached, they don’t look as lucrative to bigger brands with mega-money. And don’t forget, they can’t speak about their lives and times within the royal household. So what does that leave them to talk about which is worth any value?”

Despite the setback, another palace source did tell Sean the reigning monarch, 93, is eager to solve the matters swiftly without any “legal wrangling.”

“The queen herself does not enjoy legal battles and always believed things like this should be resolved without the court being involved,” the source alleged.

“Maybe they now both need to take stock as to what they can sell to the world next without a royal endorsement” Sean reflected on Markle, 38, and Harry, 35. “But one thing remains — don’t mess with the queen!”

A royal source also told People magazine on Wednesday the couple is currently in “ongoing discussions” about using the word “royal” as part of their branding.

“As the Duke and Duchess of Sussex are stepping back as senior members of the royal family and will work towards financial independence, use of the word ‘royal,’ in this context needed to be reviewed,” the source told the outlet. “Discussions are still ongoing."

“As part of the process to transition the Duke and Duchess of Sussex into their new chapter, planning has been well underway around the launch of their new nonprofit organization,” the source added. “Details will be shared in due course.”

On Jan. 8 Markle and Harry announced they will take “a step back” as senior members of the royal family and instead work independently, splitting their time between the United Kingdon and North America.

The couple said their decision came “after many months of reflection and internal discussions.”

"We have chosen to make a transition this year in starting to carve out a progressive new role within this institution," the couple shared on Instagram. “We intend to step back as ‘senior’ members of the Royal Family and work to become financially independent, while continuing to fully support Her Majesty The Queen. It is with your encouragement, particularly over the last few years, that we feel prepared to make this adjustment.