A service was held on Tuesday at Truist Park to honor the late Braves legendary slugger Hank Aaron.

ATLANTA - Hank Aaron’s unparalleled accomplishments span from the Midwest to the South, but echo in every ballpark, schoolyard, and sandlots across America. But Tuesday, all eyes were on Truist Park for a private memorial service for the Braves legendary slugger.

The 86-year-old Hall of Famer passed away in his sleep on Friday leaving behind not just a three-decade rule as the home run king on the field, but also a bevy of unseen and mostly unspoken about charity and civil rights work off.

MLB commissioner on the impact of Hank Aaron

MLB commissioner Rob Manfred recalls his personal friendship with the late Hank Aaron and the impact the baseball legend had on his life and career.

"The man we gather to honor today belongs on our Mount Rushmore of sports. While he made his name here in Atlanta and Milwaukee, his loss has been felt across this great nation. He was a giant of a man," Commissioner Rob Manfred.

Hall of Famer Chipper Jones told a story that he says many people don't know. He said it was Aaron that convinced Braves management to draft him.

"Y'all better draft that Jones boy," Aaron told the tip brass, as the decision was split on whether to pick Chipper up.

It was Aaron who hired Braves Manager Brian Snitker 40 years ago.

"He always wanted to move a player up, and he preferred that it wasn't the so-called bonus babies," said Snitker, who has managed the Braves since 2016 and got his start in the dugout thanks to Aaron. "He wanted to get that grinder guy, the guy who was overachieving."

Snitker was among those who spoke Tuesday at the 50-minute-long memorial service honoring Aaron.

"Hammerin’ Hank" will always be remembered for 755 — his final home run tally — but the power shots were really just the tip of his five-tool arsenal.

Atlanta Braves Chairman, Terry Guirk, talks about the life and legacy of Hank Aaron during a memorial service for the baseball legend at Truist Park.

On the field, he could hit for average. Aaron won two National League batting titles, hit at least .300 in 14 seasons, never struck out 100 times in a year, and finished with a career average of .305. Taking away all his homers, he still had more than 3,000 hits. 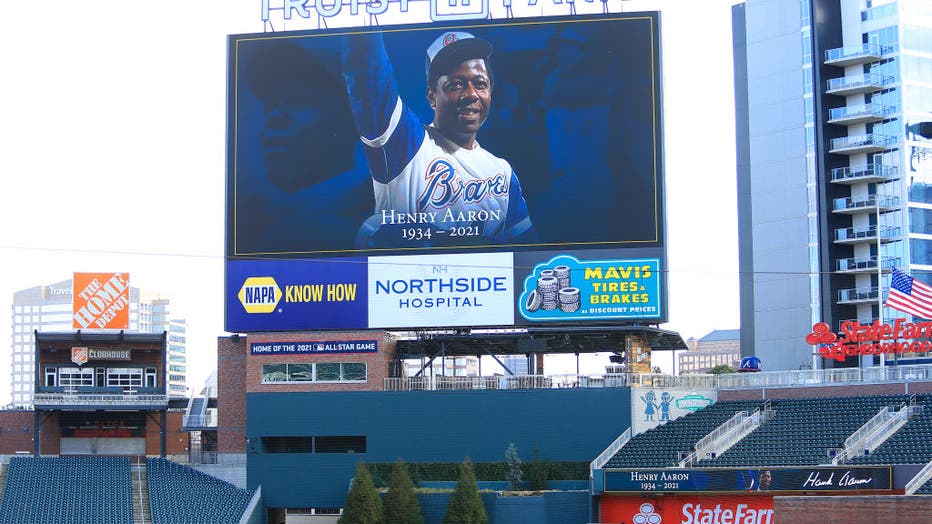 He was deceptively fast. Aaron reached 20 stolen bases six times and was successful on nearly 77 percent of the swipe attempts over his career. In 1963, he became only the third member of the 30-30 club — 30 homers, 30 stolen bases — after Ken Williams and Mays, setting an example for future Braves greats like Dale Murphy, Ron Gant, and Ronald Acuña Jr. to also join the club.

And his defense, Aaron started out as a middle infielder but once he got acclimated to right field, he captured three Gold Gloves and probably deserved more. He had a rifle for an arm and fielded his position with such smoothness and grace — a striking contrast to Mays’ flamboyant style — that he made the job look easier than it really was.

Aaron piled up at least 20 homers in 20 consecutive seasons. He hit .300 for the first time at age 21; he did it for the last time at age 39. He had at least 60 RBIs every season of his 23-year career except his last when he played just 85 games for the Milwaukee Brewers. 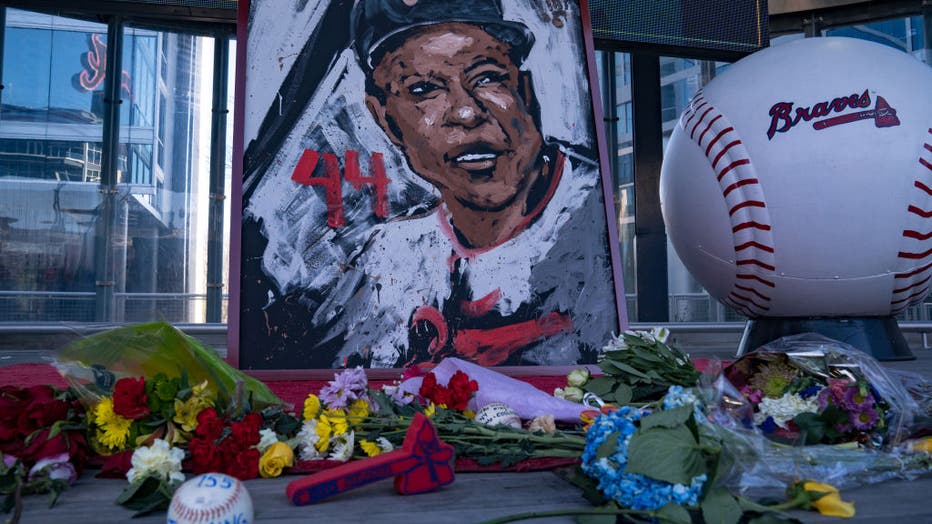 Despite all that, Aaron struggled for years to gain recognition for his accomplishments.

When Aaron approached Babe Ruth’s sacred 715, the hate mail increased. Racist fans were outraged that a Black man was taking down the hallowed mark of a white man had held onto for four decades.

Thankfully, Aaron lived long enough to experience the reverence he had earned and so richly deserved. Yet, even as he took on an almost mythical aura, Aaron always carried himself with humbleness and dignity.

Atlanta Braves Manager Brian Snitker recalls his own personal story with Hank Aaron during a memorial service at Truist Park.

Off the field, the total amount of his accomplishments may never be known. Among his close friends was former Atlanta mayor and former UN Ambassador, Andrew Young.

"Hank Aaron lived a great life. He was not only a great baseball player, he was a great man. He did more to help people from his business profits than he did from baseball," Young said.

Reflecting on the life of Hank Aaron

The Home Run King's last public appearance was earlier this month when he, Young, and former Health and Human Services Secretary Dr. Louis Sullivan received their coronavirus vaccinations at Morehouse School of Medicine. And once again, Aaron was thinking of others.

Young said Aaron may be gone physically, but his impact on the world lives on indefinitely.

"He learned to live without fear. That is the basis of courage," Young said. "This is a spiritual, the physical doesn't last forever. I think we are going to always remember Hank Aaron. You will not be able to go to that ballpark without going by and paying your respects to that wonderful statue."

After his baseball career, Aaron returned to the Braves franchise as a vice president and director of player development, a task he held for 13 years before settling into a largely ceremonial role as senior vice president and assistant to the president in 1989. He also ventured into business, buying fast food chicken franchises, doughnut shops, and an automobile dealership. He also dipped into politics as campaign treasurer for his brother-in-law, David Scott, who was elected to the U.S. House. 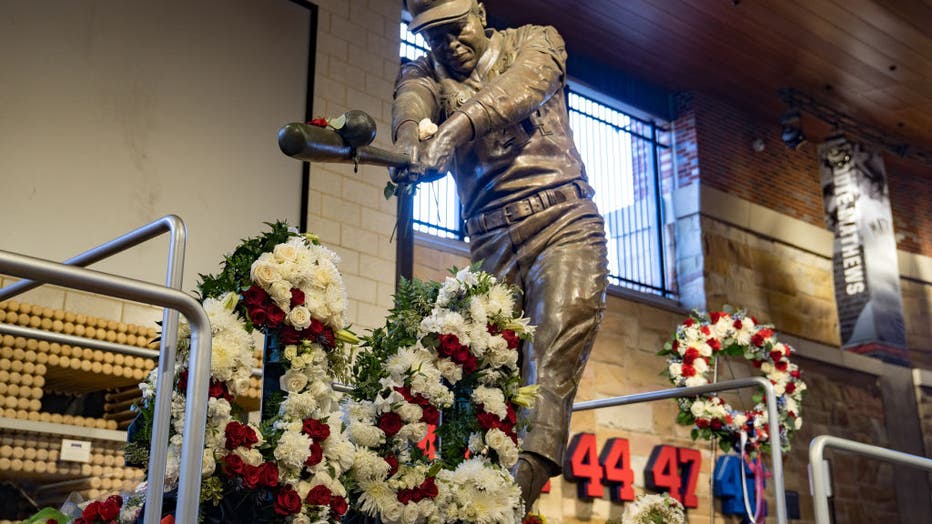 Aaron is survived by his wife, Billye, and their daughter, Ceci. He also had four children from his first marriage to Barbara Lucas — Gail, Hank Jr., Lary, and Dorinda.

The baseball legend's funeral will be held on Wednesday at 1 p.m. at Friendship Baptist Church. Both services are private due to COVID-19 concerns but will be streamed right here on FOX5Atlanta.com

The Associated Press contributed to this article